Cinema’s most notorious cannibal has returned to public life as the unlikely star of a one hour NBC crime drama.  Hannibal, set before the events of Red Dragon and Silence of the Lambs, finds a middle-aged Lecter assisting the FBI on grisly manhunts while masquerading as a Baltimore psychiatrist with a fridge full of secrets.  Any movie fan would naturally be concerned that TV censorship and commercial interruptions inhibit Hannibal even more than his signature straitjacket and facial restraints.  Yet the horror icon remains menacing and seductive in his new serialized incarnation, bringing a potent flavor to introductory episodes “Aperitif” and “Amuse Bouche” that masks the blandness of formulaic forensic shows.

If nothing else, series creator Bryan Fuller (Heroes) has found the perfect actor for the pivotal title role. Dane Mads Mikkelson avoids Anthony Hopkins comparisons by drawing more on the sinister minimalism of his James Bond villain from Casino Royale.   This Hannibal is trying to pass himself off as a boring suit, so he can’t risk the theatricality of those purring taunts and unblinking stares that caged Hannibal used to intimidate his interrogators.  Lecter lives out his double life wearing an unwavering poker face, but subtle gestures and asides help Mikkelson retain the dark humor and refinement that has always made this beast relatable.   A dinner of exquisite looking mystery meat, or a courtesy call placed to a fellow serial killer, play like private jokes between the viewer and this strangely admirable enigma.

Dr. Lecter hungers for an equal to sniff out his true nature, which makes his relationship with tortured FBI profiler Will Graham (Hugh Dancy) the crux of the show.  Graham’s heightened intuition helps him process crime scene clues through the eyes of the most depraved psychopaths – he’s a great investigator but an unstable lawman.  Lecter is brought in to help Will develop coping skills and process his recent first kill, but the shrink uses the sessions instead to insinuate his macabre world view inside Will’s fevered brain.  Dancy’s jittery performance is a nice contrast with Mikkelson’s calculating stoicism, even when the storylines push Graham’s emotional state to campy extremes.

Fans of Red Dragon and Manhunter recognize Will Graham as Lector’s eventual captor, but Hannibal has changed enough about the set-up to make that future uncertain.  Like JJ Abrams’ Star Trek or A&E’s Bates Motel, the project isn’t a slave to the source material and many canonical elements have been tweaked successfully.  Will Graham looks more damaged and socially awkward here than in the movies because he has a house full of stray dogs rather than a stabilizing wife and son.  Turning sleazy male reporter Freddie Lounds into a scheming female blogger not only contemporizes the character, it gives Lector a tempting new target.   As long as the show runners respect the source material, I think defying expectations is a great way of keeping fans interested.  Right now I don’t care if this Lecter ever ends up behind bars.

Still, not everything about Hannibal feels like a fresh reinvention.   Laurence Fishburne makes for a credible Jack Crawford, but he leads a stock crime fighting unit transplanted from a lesser procedural (annoying Asian scientist, dour bearded white dude, sexy lady shrink, etc.).  And the overwrought cases, which include a deer hunter skewering women on a wall of antlers and a pharmacist growing a mushroom garden out of comatose diabetics, create the bogus impression that every murderer on the East Coast is some aspiring performance artist using cannibalism to redress childhood hurt.  If this is what we’re going to get week after week, it’s going to diminishes Lecter’s reputation as a unique monster.

Hannibal has impressive production values, and its queasy corpse imagery and violent standoffs don’t feel compromised by broadcast television standards.  Yet I can’t help feeling like the show would play better on a network that doesn’t require it to make room for 17 minutes of commercials. Graham resembles a psychic more than a cop when ads don’t give us enough time to covet the clues, and he has to make improbable deductions to compress the plot.

Despite its flaws, Hannibal promises to be a worthy new chapter for the serial killer if it can maintain the Lecter/Graham dialectic.  I’m just afraid the show will get lost in America’s overcrowded DVR and wind up cancelled before its audience can find it.  I definitely RECOMMEND streaming both episodes over at NBC.com sooner than later, and look forward to tasting the remaining 11 courses of Season One. 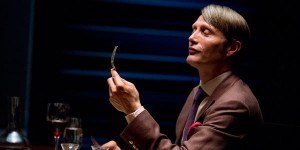