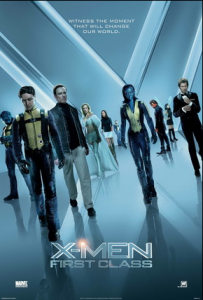 I didn’t really want to review the X-Men films for Now Playing Podcast.

Don’t get me wrong, I enjoy discussing any movie in-depth, whether it’s Leprechaun in Space or Touch of Evil. But for X-Men I had a specific hesitation.

I had, in passing, already discussed these films with longtime friend and podcast co-host Stuart. It was clear we didn’t see eye-to-eye; he expressed a preference for Bryan Singer’s earlier, dour X-films; I actually enjoyed Brett Ratner’s third X-Men movie, The Last Stand, the most — finally giving the superheroes fight sequences they’d been denied on screen.

I hadn’t seen the X-Men films in a few years by 2011, when we started our Marvel Movie Retrospective Series, but I was fully prepared to stand alone with my minority opinion.

It wasn’t that I loved X-Men: The Last Stand. I felt all the X-Men films were lacking in some areas, and expressing my preference for Ratner’s vision didn’t mean I could champion it. I loved Marvel, especially the movies, but to this franchise I held no allegiance.

That is why in 2009 we took a pass on that year’s X-Men Origins: Wolverine. After the film was released we felt doubly justified.

But, as I discussed in my Howard the Duck article, in 2011 Now Playing was beginning its most ambitious endeavor; reviewing every Marvel-based movie ever released in theaters (U.S. or overseas). That meant Stuart, Jakob, and I would have to tackle the X-films, eventually.

How we approached this retrospective was the subject of some debate. I initially pitched doing all the films intermixed, in chronological order. Perhaps because it would have seemed odd to have 2002’s Spider-Man review immediately followed by 2003’s Daredevil and Hulk (both released before Spider-Man 2) Stuart wisely suggested breaking the series into a number of smaller sub-series; do Spider-Man as a unit, Blade as another group, and the X-Men by themselves. But then how would we order them? First-to-last according to release date? Or do we start with the most recent film?

Finally, realizing the interest listeners had in our theatrical release reviews, we decided to just shuffle all the series’ around to whatever order fit; but two rules presided. First, we would arrange series’ so that if they had a theatrical release, as happened for X-Men and Ghost Rider, we would tie into that release. Second, we would do all the movies in time for the ultimate Marvel crossover movie: 2012’s The Avengers.

(Sony then threw a wrench in that plan by releasing their The Amazing Spider-Man reboot in the weeks following Avengers, making Marvel’s most popular superhero the only one we hadn’t reviewed)

Would audiences accept an X-film without Wolverine?

This massive undertaking meant we could delay it no further; we had to review X-Men. More, while we had done three one-off Marvel movies — Howard the Duck, Man-Thing, and Kick Ass, in a loose group we called Marvel Misfits — X-Men was our first real series in the Marvel Movie Retrospective. This was demanded by the release of 20th Century Fox’s impending reboot/prequel of their X-franchise, X-Men: First Class.

It turns out all of this fear was for nothing. While Stuart and I did disagree over the merits of the first three X-Men films and Origins, the conversations were always fun. More, Jakob provided a great third perspective that tempered both of our points and prevented the conversations from following any preconceived pattern I’d feared. Also, revisiting the films with revised expectations allowed me to appreciate them more than I had in the past.

More importantly, though, in 2011 the X-Men got their first truly great film with First Class. I had feared not finding a film I loved in the X-series, but new director Matthew Vaughn delivered that in spades.

First, the film had a lead cast that was nothing short of amazing.

I knew James McAvoy from his earlier teen comedy Starter For Ten, a film funnier than its teen game show premise deserved. The actor was also a standout in Wanted, holding his own against Morgan Freeman and Angelina Jolie, and imbibing his character with personality that seemed lacking from the movie’s thin script.

Still, while I liked the man’s work, I had a hard time imagining him as Charles “Professor X” Xavier, the lead X-Man portrayed by Patrick Stewart in the earlier films. But with Vaughn’s direction and the script (co-written by the director) this was a young, cheeky Xavier, and McAvoy owned the part.

He was, however, overshadowed by co-star Michael Fassbender, who took the role of Erik “Magneto” Lensherr; previously occupied by Ian McKellen. X-Men: First Class took elements from a canceled X-Men Origins: Magneto script — and truthfully this film is Magneto’s. Like the original X-Men film, First Class opens in a Nazi concentration camp showing Magneto, still a child, discovering his powers. But it continues that story line and shows the Nazis grooming Lensherr and training him. Magneto’s quest for revenge is the true arc of this film, and, playing Erik as an adult, Fassbender commands the screen.

I can’t recall even hearing Fassbender’s name before First Class. I had seen him in only two films: 300 and Jonah Hex, and neither performance was memorable. From this role I knew Fassbender had amazing range. With the X-Men franchise under his belt Fassbender has picked a variety of mostly smaller films allowing him to demonstrate his range, but he was truly the best find of First Class. 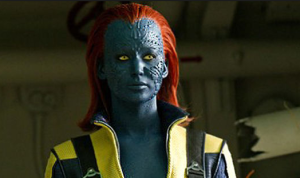 That is probably a somewhat unpopular opinion, especially for any Hunger Games fans reading this review, as First Class also featured Jennifer Lawrence, starring as the shape-shifting mutant Mystique (a role previously played by Rebecca Romijn). Unlike Fassbender, I knew of Lawrence before First Class due to her role in Winter’s Bone. Strong word-of-mouth brought that movie to my attention, and Lawrence earned an Academy Award nomination for her role. Still, while already an acclaimed actress, she was just beginning her career. Few could have predicted what her future held; becoming Hollywood’s biggest actress thanks to her role of Katniss in the aforementioned Hunger Games series, plus continuing to make critically acclaimed films, as well as winning an Oscar for her role in Silver Linings Playbook.

In X-Men: First Class it was clear she was as talented as her more seasoned co-stars. While not much more than a sexy henchman in the original X-Men trilogy, here Mystique’s dilemma is the heart of the film; she can do amazing things but her true form is scaly and blue. The film shows her path of self-acceptance and, as a by-product, her allegiance shifting from the more diplomatic Professor X to the more militant Magneto.

Even the smaller roles were stacked with great performances, with Kevin Bacon, Rose Byrne, Nicholas Hoult, and Oliver Platt being stand-outs. I felt the only weak link in the film was January Jones, the Mad Men star who played “White Queen” Emma Frost.

Yet while the cast was amazing, its director was even more so. I knew Vaughn only for his 2010 superhero parody Kick-Ass, and he brought that same visual flare and fast-paced storytelling style to First Class. Also, like Kick-Ass, this film had actual character development intermixed with a healthy dose of comedy.

Out of all the X-Men films, this was the first one that had been really, truly fun while also establishing amazing rivalries and human drama. It was the first great X-Men movie.

It was a delight to watch, and I was ecstatic while recording the Now Playing review when I discovered Jakob and Stuart had seen the same film I did. The only thing better than watching an amazing film is sharing that enthusiasm with other film lovers.

The movie, and that podcast review, were my personal high points of our X-Men retrospective series, and it kicked off our Marvel Retrospective with a huge bang. There were good times ahead.

In the three years since this film’s theatrical release I’ve seen it at least a dozen more times. I went back to see it in theaters even after Now Playing’s review, just for fun. I bought it on its Blu-ray release date, and watched it immediately. It’s a staple, any time it airs on television I turn it on again. On flights it’s the movie that gets the most play on my iPad. 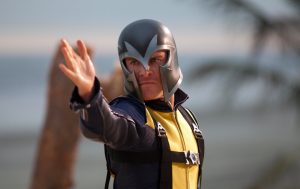 Fassbender’s Magneto is the highlight of the film.

Yet this enthusiasm is tinged with sadness. While I did not share a dissenting opinion on the podcast, all three of us seem to be in a minority group for our love of this film. It became the lowest grossing X-Men film ever — audiences just didn’t turn out to see the movie. Perhaps they were put off by the lack of Wolverine? Maybe the 1960s period piece feel didn’t appeal to 21st Century moviegoers? Perhaps the summer was just too full of superheroes with Thor and Captain America also hitting screens? No matter the reason, the film failed to find an audience and made less money than 2000’s original X-Men, even with 11 years of ticket inflation taken into account.

More, it seems this movie didn’t catch on in home video. I thought it could have a second life in home theaters, but my anecdotal evidence suggests people simply preferred the movies with the original cast to this new vision.

If there is no greater joy than discussing a beloved film with others who share that sentiment, there are few feelings more depressing than feeling alone and wondering why everyone else can’t see in this film the great things I see.

Worse, lack of fan response ended First Class‘ run in the X-Men. Fox, knowing they have to battle Marvel (who are the creators of the X-Men characters, but don’t hold the film rights), decided a major course correction was needed for the studio’s premier superhero franchise. They had definite ideas for the next X-Men movie, and were prepared to spend more than they ever had before to ensure their mutants could stand their ground against the Avengers. Studio interference and demands, including bringing back some members of the original cast to appeal to fans, led to Vaughn abandoning development on the sequel film, and in his place Bryan Singer returned to the franchise.

The result of Fox and Singer’s work was this year’s X-Men: Days of Future Past. It was a very good movie — Singer’s best entry in the franchise by a mile. Yet it didn’t do as good a job juggling the characters, the story line wasn’t as tight, and it lacked the groovy, kinetic fun of First Class. It lacked Vaughn, who was the X-factor the franchise needed most.

But again I may stand alone in that opinion, as Days of Future Past became the highest-grossing X-film to date; besting X-Men: The Last Stand’s take in 2006.

I have no doubt that with the upcoming X-Men: Age of Apocalypse, the X-films will continue to get grander and mix in more cast members new and old. I just hold out hope that at some point they look back and see all that First Class did right, and bring some of that lighthearted humanity back to the X-Men.