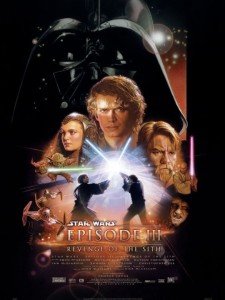 Star Wars’ greatest legacy may not be the (now endless) sequels, or the billions of dollars in box office revenue, or even the tens of billions of ancillary revenue the franchise has generated for Lucasfilm (now Disney). No, the longest lasting impact of Star Wars may be the people inspired by that film saga to go on and create themselves.

Filmmakers as varied as Jon Favreau, Damon Lindelof, and Eli Roth have all cited Star Wars as an important inspiration to their works, as have numerous authors, artists, game designers, and more.

In 2005 Star Wars inspired me as well… to become a podcaster.

By the time Star Wars Episode III: Revenge of the Sith was released I was pretty far-gone in terms of my fandom. Any lull I had experienced from 2000 to 2002 was long gone. My 2-bedroom townhouse had become a virtual Star Wars shrine with toys, prop replicas, and other various bric-a-brac on display in every room. As much due to my collection as it was a desire to build equity, Marjorie and I eventually left the rental property behind and moved into a home specifically selected for its ability to handle and display my Star Wars collection.

I had gotten three Star Wars tattoos since Attack of the Clones was released, including a Yoda that was based on the art in Genndy Tartakovsky’s Clone Wars micro TV series that bridged the story between Episode II and III. I was the ultimate Star Wars consumer — if it had a Star Wars logo I either bought it or put it on a long list to buy. I even, much to the amusement of the Target clerk and the embarrassment of my wife, bought a pair of Star Wars underwear intended for small children. To outsiders it was an undergarment, but to me it was a collectible.

The birth of Darth Vader was the moment fans had waited 28 years for.

The excitement grew as we drew close to Revenge of the Sith’s May 2005 release date. The premiere was May 19 at 12 a.m., and I took the day off of work to sit outside the theater trying to get the best seats. Though I arrived at 10 a.m., I was not the first in line.

Coming off the high of the Star Wars Celebration III convention we attended in April, Marjorie and I had prepared line party events, including trivia, prizes, and music. I rolled up in my convertible with two 12-inch subwoofers in the trunk and blasted dance mixes of Star Wars themes. It was a party, and a blast.

I did have to leave the party for a couple hours to teach class — which I did wearing a Darth Maul tie.

What about the movie? It was far from an afterthought in all the festivities, it was the main event. The conventions, the toys, the party, they were all ways to express our fandom and excitement for the upcoming release. But when I sat in that theater the early morning hours of May 19 I was enthralled. Instantly I knew this was the best of the Star Wars prequels, by a long shot. It was the first of the new trilogy to have emotional weight. Plus it had great action, exciting new characters, and even succeeded in besting The Phantom Menace by having the best lightsaber fight of the entire series. I had high expectations for Episode III and the film lived up to them. 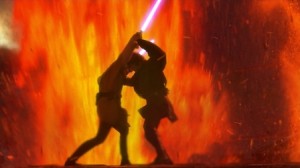 The CGI visuals in Revenge of the Sith were striking and stunning.

I lived on a euphoric high for weeks after seeing Revenge of the Sith. I went several times in local theaters, not out of a sense of obligation as I did with Phantom Menace but because I wanted to enjoy the film again. Then Marjorie and I drove to Chicago to see the film digitally with Stuart, my Now Playing Podcast co-host and longtime friend.

My Star Wars collecting went to even greater heights. Every day during our lunch hour Marjorie and I would go on a toy run, visiting one or more stores looking for new Star Wars toys.

Weeks passed, though, and while my fandom never wavered the anticipation turned into a feeling of melancholia. I had been looking forward to the Star Wars prequels since they were first officially announced in 1993 (in, of all things, a Star Wars screensaver). For twelve years I’d always had the next Star Wars film to which I could look forward. With the prequels done I wondered if I would ever again experience that level of anticipation.

To continue to experience fandom in new ways I read more Star Wars novels and comics, and visited websites and online forums. There I saw repeated mentions of something called a “podcast.” 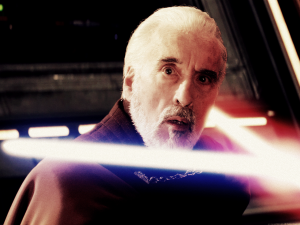 Still a better ending than Christopher Lee got in the Lord of the Rings series.

Being a tech head and, at that time, a college professor of Computer Science, I had heard of podcasting. I never understood the appeal; I was no fan of talk radio. More, I didn’t have an iPod, preferring the Creative Labs Nomad player. Yet now I saw there were podcasts discussing Star Wars, so I listened, and was excited. In my daily life I knew no Star Wars fans other than Marjorie, but on these shows were fans just like me, and they spent hours each week talking about nothing except Star Wars! Even more impressive, the Canadian podcast Star Wars En Direct even had Star Wars authors on the show to discuss their books.

I not only listened to the new podcasts, I went back and consumed the archives of many of these shows. Yet one thing frustrated me; while there were podcasts about Star Wars books, movies, and comics, none existed to talk about Star Wars collecting. Slowly the idea dawned on me… I should do my own.

I had a background in audio production. My desire to entertain, inspired by Pump Up the Volume, had sent me to study Mass Media Communications as an undergraduate. I was a radio DJ, and in my spare time experimented with digital audio, including rudimentary audio editing. As time went on I experimented in other computer multimedia, including video editing. I had the basic skills to do it, and just a few hours of research showed me all the technologies I would need to make it happen.

I also had my own website. My career goal had been to become a video game designer, and to build my resume I created a site reviewing PC games new and old.

So on Sunday, August 28, 2005, a little more than three months since Revenge of the Sith had visited theaters, I was inspired to create my own Star Wars podcast. I will never forget the conversation I had with Marjorie that Sunday morning.

“What plans do we have today?” I asked.

“Nothing,” she replied. It was a rare day that we had no obligations.

“Do you want to help me make a podcast?”

Palpatine’s slow corruption of Anakin Skywalker was a highlight.

Within a few hours I had dug some old microphones out of a tote in my closet, installed the necessary audio editing software, and we were off. I didn’t know if anyone would listen, though I hoped they would. No matter what, though, I knew we’d always have the designation of having done it first.

I eventually learned that people did listen. I had reached out to several of the Star Wars websites and podcasts I’d read as a fan, and they actually posted about our show. I received immediate feedback, and that first week we had more than 50 downloads. The very next weekend I was at Best Buy to purchase better microphones and take some of that feedback to improve the show.

Tens of listeners became hundreds. Hundreds became thousands. Our show was a success. And while it was not earning money, I had finally found an outlet for my dream of entertaining people. Sure, I worked days at a bank, nights at a college, but on weekends I was a Star Wars commentator and collector.

That one podcast led to another… and another… and another. Marjorie and I have since traveled the country as invited Star Wars experts to speak at conventions. We have taken the mentality of throwing a Star Wars line party and grown it — at the last Star Wars Celebration we threw a party for almost 500 listeners and friends. Plus every year at San Diego Comic-Con we host the Star Wars Fan Breakfast for a sold-out crowd.

Most importantly, though, new friendships were formed. Marjorie and I met people near and far thanks to the reach of our Star Wars podcast. Now I had friends with whom I could chat about the saga, in addition to the regular show discussing my collecting.

And, of course, you’re probably reading this specifically because of Star Wars Action News. After all, without Star Wars Action News there’d be no Now Playing Podcast, the movie review show Marjorie and I started in 2007 and, with years of nurturing and attention, has grown to have an audience that even exceeds that of our cardinal show.

These days it’s common for me to say “My life is weird.” I think this when I attend press events to interview the stars and directors of Leprechaun: Origins. The thought crosses my mind when I’m having a normal day at work and a piece of fan mail appears on my phone. I say it out loud when I see lines of people anxiously waiting to get into an event I’m hosting, just as I was anxious to see Star Wars in theaters. I’ve had the tremendous fortune to do things, meet people, and go places that many only dream of. I don’t take any of that for granted, but I always acknowledge that it’s a path I was inspired to take because of Star Wars Episode III:  Revenge of the Sith.