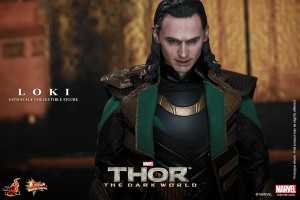 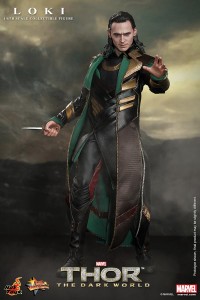 When Thor: The Dark World was released in November, 2013 the Hot Toys tie-ins were notably quiet.  For both The Avengers and Iron Man 3 Sideshow Collectibles had a large number of Hot Toys figures up for pre-order before the movies were even released, but Thor had only two:  the regular Thor sixth-scale figure (still available for pre-order) and the Sideshow Exclusive Thor in Asgardian Light Armor (the pre-orders are sold out but there are spots available on Sideshow’s Wait List).  But long rumored were other figures, and an obvious one was fan-favorite villain Loki.

Loki stands about 12-inches tall and comes with an incredibly detailed black, green, gold and red suit as ween in the film.  A combination of materials gives this a leather-like sheen.

The facial likeness shows a menacing Tom Hiddleston.  The facial expression is grim, and makes the face look a little less like the actor than the (long sold out) Avengers movie Loki, but this may also be the result of the pre-release photos of the prototype.

Loki comes with 6 interchangeable hands in a variety of poses, his trademark dagger, plus manacles for his wrists and ankles so you can recreate the scene in which he is sentenced for his treason.

Additionally there is an exclusive edition of this figure, available only through Sideshow Collectibles, that comes with the Aether Accessory from the movie!

All Hot Toys based on Marvel movies sell out in time, and with Loki being such a fan favorite I suspect he may sell out even before his brother, even though Thor had a 4 month head start!  So don’t delay, flex pay is available, get your order in now at Sideshow’s site!