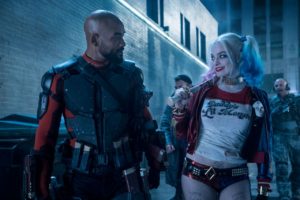 The VR content, which Samsung will debut at Co
mic-Con 2016 along with other Suicide Squad-themed immersive experiences, transports viewers into a scene from the film and features their favorite characters like Harley Quinn (Margot Robbie), Deadshot (Will Smith) and Katana (Karen Fukuhara).

Using Samsung Gear VR powered by Oculus, the VR content will debut at San Diego Comic-Con on July 21.  It will transport fans into the world of Suicide Squad, experiencing what it’s like being a member of the Squad and watching their favorite characters, like Harley Quinn, Deadshot and Katana, in a scene from the film.  It will be available on August 5 on Samsung VR, the brand’s premium virtual reality content service.

“Suicide Squad is one of the most anticipated films of the year and we’re thrilled to team up with Warner Bros. in this innovative way,” said Marc Mathieu, Samsung Electronics America’s Chief Marketing Officer. “Connecting with fans through immersive VR and 360 storytelling and breakthrough experiences gives Samsung yet another opportunity to explore how our technology can enhance popular culture.”

Gene Garlock, Executive Vice President, Worldwide Promotional Alliances and Partnerships, Warner Bros. Pictures, stated, “We’re absolutely delighted to be working with Samsung Electronics via such a broad and inventive partnership.  Our collective aim is to reward fans of the property both in the consumer market and by giving them the chance to immerse themselves in a virtual environment alongside the Suicide Squad characters in a most realistic and exciting way.”

Samsung will provide fans exclusive content and experiences throughout the summer, including:

Fans who purchase a Samsung Galaxy tablet* at leading retailers, will receive two tickets to see Suicide Squad when it opens in theaters August 5. The national retail promotion will run from July 15 through August 20, or while supplies last.  For more information and a list of participating retailers, please visit SamsungPromotions.com/SuicideSquad.

At San Diego Comic-Con from July 21 through 24, Samsung will help bring the film to life by transforming the Samsung Experience into a real-life Suicide Squad experience. The Belle Reve penitentiary, the high security prison in which the Suicide Squad themselves are held, will be recreated in the space and fans will have the chance to take part in immersive film-themed experiences, such as getting a custom tattoo in Harley Quinn’s tattoo parlor.

Attendees will have the option to ‘Join the Squad’, an interactive feature which enables them to create their own Suicide Squad character and generate a short video of themselves to share on their social channels. Fans can then create their own personalized skulls using the icon generator to live print them on their own exclusive t-shirt. In addition to the exclusive VR content debuting at Comic-Con, cast members will make an appearance in the space.

Samsung will celebrate the movie as an official partner for the U.S. premiere of Suicide Squad on August 1 in New York City, including the after-party.  Samsung will create interactive experiences throughout the space to give attendees a chance to immerse themselves into the film using Samsung technology. Select Galaxy owners will also get exclusive red carpet access and a chance to see the film first.

To coincide with the movie’s world premiere in New York City, Samsung 837, the brand’s experiential flagship where technology and culture collide in Manhattan’s Meatpacking District, will feature special Suicide Squad VR content in the flagship’s VR Tunnel throughout the week of August 1.