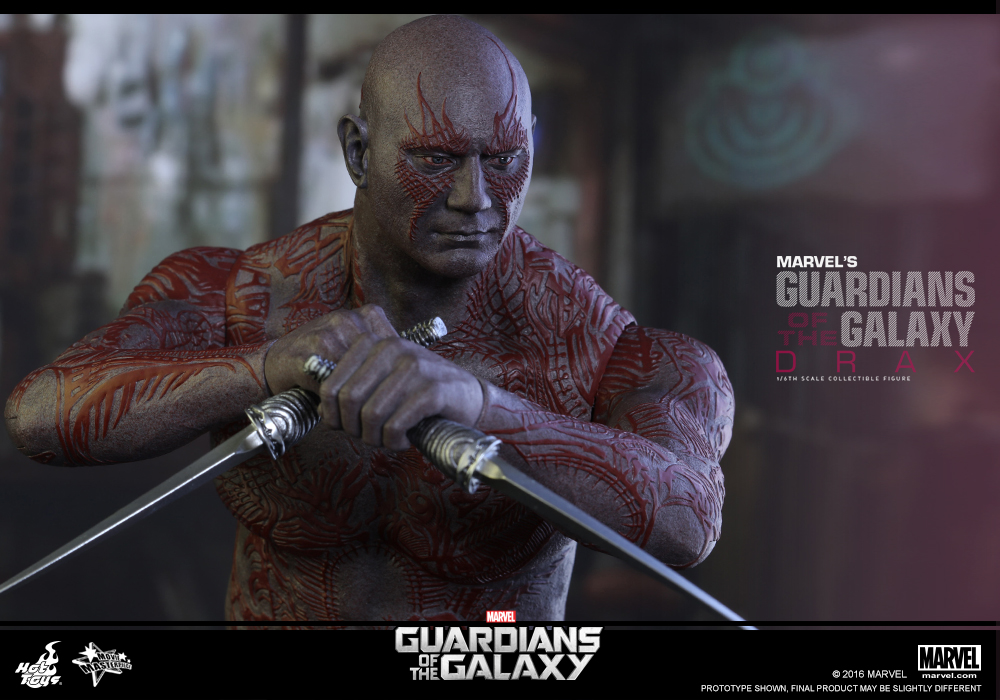 Two years ago Hot Toys released their Guardians of the Galaxy figures. Star-Lord, Gamora, Rocket Raccoon, and Drax were put up for pre-order shortly after the film’s 2014 release…but the question remained “Where’s Drax?”  He was shown at San Diego Comic-Con in 2014, but no orders were available, and questions to Hot Toys went unanswered.

People started to fear Drax would never come, put in the same category as the X-Men: First Class Magneto and Charles Xavier, and a handful of other never-released figures (Amazing Spider-Man 2’s Rhino will hopefully be added to that list).

But now Guardians fans can stop worrying! The Drax MMS Sixth Scale figure is now up for order!

The movie-accurate Drax collectible figure is specially crafted based on the image of Dave Bautista in the film, featuring the newly developed head sculpt, a newly developed muscular body with detailed sculpture of the character’s iconic tattoos, two styles of interchangeable pants, two blades, a rocket launcher, and a Guardians of the Galaxy themed figure stand.

Guardians of the Galaxy fans, don’t let the chance to own this collectible figure fly over your head.

The full specs for the piece are:

So what are you waiting for? You! Man who has lain with an Askervarian! Get to Sideshow’s site and order now!