St. Patrick’s Day is a time for partaking in many great traditions – pinching those that forget their green apparel, washing corned beef and cabbage down with a Shamrock Shake, or maybe dancing a jig at the local pub. Movie-going, however, never seems to play a big part of the holiday. That’s because Irish movies are fookin’ shite!

Look, I’m from Irish stock myself. It gives me no pleasure to reach this conclusion about the state of Celtic cinema. And it’s frustrating when you consider how many great Irish actors (Daniel Day-Lewis, Liam Neeson), actresses (Saoirse Ronan, Maureen O’Hara), and writers (Oscar Wilde, Martin McDonagh) have brought iconic stories to the movies. But I find it impossible to name five Irish films I love.

Hollywood has been the worst perpetuator of Emerald Isle clichés – Sean Connery singing with Darby O’Gill And The Little People, Tom Cruise boxing to Enya in Far And Away, and Tommy Lee Jones channeling a box of Lucky Charms as Blown Away’s psycho IRA bomber. I’m a staunch defender of Titanic, but even I wouldn’t hold it up as a great depiction of my peeps.

The trouble is productions from native filmmakers are no better. I’ve endured soggy history lessons (Michael Collins, In The Name Of The Father), tortured biopics (Angela’s Ashes, The General), cloying romances (Once, The Playboys), and insufferably cute comedies (Waking Ned Devine, Hear My Song… so off tune I walked out on it).  I know I’ve omitted some beloved Irish “classics”, but show me one that isn’t about starvation, drunkenness, or political oppression – that unavoidable trifecta of Ireland’s miserablist existence.

St. Paddy’s Day is supposed to be about having fun. So I’m forced to get a little creative in order to present a movie marathon that compliments the occasion. None of these five flicks are “Irish” in any traditional way, but they’re a hell of a lot more enjoyable than My Left Foot.

Images (1971)
Arty thriller has children’s author Susannah York descending into madness on holiday in the Irish countryside. This atypical effort for director Robert Altman and composer John Williams plays like a Celtic prequel to The Shining.

Jekyll (2007)
Sure you could watch Irish actor James Nesbitt make his country proud in Paul Greengrass’ 2002 Bloody Sunday re-creation, but I enjoy him so much more as the definitive screen version of Robert Lewis Stevenson’s split personality in this addictive six hour BBC mini-series.

Miller’s Crossing (1990)
Long before Boondock Saints made Irish gangsters trendy, the Coen Brothers shot up the screen with a mob movie that’s got dialogue and camerawork as rapid fire as a Tommy gun.

Snakes On A Plane (2006)
What better way to honor the legend of St. Patrick driving serpents from Ireland than watching MF Sam Jackson do the same for a doomed Hawaiian flight?

Withnail & I (1987)
Richard E Grant goes on the ultimate bender in 60s London starring in the cult movie that made his career. True he’s not Irish, but if this holiday is just an excuse to get drunk then think of Withnail as the St. Paddy’s Day version of It’s A Wonderful Life.

And if you opt for Gangs Of New York or The Departed, head over to nowplayingpodcast.com afterwards to listen to my thoughts.  Both movies are available as podcasts in a Martin Scorsese/Leonardo DiCaprio Retrospective (which will be picking back up this fall with the release of The Wolf Of Wall Street incidentally). 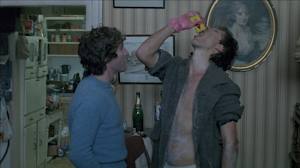