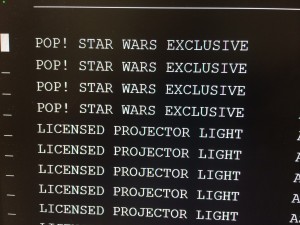 This month saw the first Walgreens Marvel Comics exclusive figures in the Funko POP! Vinyl figure line.  Now it looks Walgreens will be getting POP! Vinylu exclusives from another Disney licensee–Star Wars!

A Bothan spy contacted us this morning with information from the Walgreens stock system showing four upcoming items all listed as “POP! STAR WARS EXCLUSIVE”

The Walgreens exclusive Marvel POP! Vinyls are just now starting to appear in Walgreens stores.  With both Black Outfit Spider-Man and Spider-Man 2099 packed 1 per case eBay prices have soared as high as $60.  Star Wars collectors should brace themselves for similar short-packed figures.

More information on this will likely be revealed at Toy Fair International, taking place this coming weekend in New York City.  Star Wars Action News and Marvelicious Toys will both be covering the events, so be sure to follow them through social media for the latest updates on all Star Wars and Marvel toys!