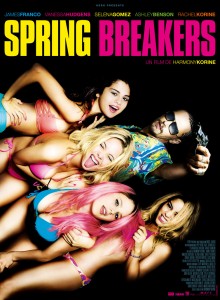 Harmony Korine, a provocateur with a long rap sheet of films about juvenile delinquency, isn’t the most obvious candidate for directing a teen party movie set on the beaches of St. Petersberg. His previous youth culture explorations have shunned Disney princesses in florescent bikinis in favor of more extreme subjects – a serial rapist spreading AIDS (Kids), a drooling schizophrenic (Julien Donkey-Boy), cat killers on ten speed bikes (Gummo), and fetishists grinding their pelvises against canisters of garbage (Trash Humpers – his most literal celebration of depravity).

Yet the four curvaceous coeds at the center of Korine’s new opus Spring Breakers share a commonality with all the other freaks in his menagerie: they’re poor, horny and bored… and that makes them dangerous. Desperate to escape the crushing sameness of their deserted dorm, Candy (Hudgens), Brit (Benson), and Cotty (Rachel Korine, Harmony’s wife) use squirt guns and harsh language to intimidate patrons at an all-night diner into funding their hedonistic vacation. Faith (Gomez) knows she’s courting sin by abandoning her Bible study group for beach time with these hellions, but the utopian promise of Florida’s flesh parade proves equally irresistible to her repressed soul. These girls are sick, and fun is the only cure for what ails them.

Ironically, those most primed for the sun-burnt decadence of a Girls Gone Wild video, or crass Hollywood comedy like Project X, will probably be Spring Breakers’ most disappointed audience members. Korine has never cultivated a taste for commercial storytelling or traditional beauty, and remains fixated on unflattering details as he reduces the foursome’s exploits to a disjointed montage of scooter rides and repetitious drunk talk. Boredom hasn’t been conquered, merely transformed into something more frenzied and sad.

The fun doesn’t begin for viewers until our heroines are jailed and forced to take bail money from Alien, a drug smuggler with delusions of rap superstardom. One look at James Franco’s gold-toothed leer as he leads the ladies from the courthouse into a spaceship-shaped bed blanketed in $100 bills tells you Korine has finally found the proof he needs to convict the American Dream. “Look at my sheeyit! This ain’t nuttin’, I got ROOMS of this shit,” the narcissist boasts as he produces everything from Kool-Aid to Calvin Klein cologne in an effort to impress his guests. It’s Alien who completes Candy and Brit’s transformation into gangsta bitches now packing real firepower, and the trio sail off into a day-glo finale filled with Britney Spears sing-a-longs and drive-by shootings.

Many will call Spring Breakers an empty exercise full of callow behavior, and I’ll not dispute them. Still, I Recommend the movie to anyone able to appreciate the singular way Korine and cinematographer Benoit Debie (Enter The Void) render depravity as its own special kind of beauty. The paradox of their painterly images, married with Franco’s gonzo-yet-human performance, creates empathy for these shallow party girls when their words and deeds might otherwise draw contempt. Korine might not be an artist, but I refuse to label him an exploiter. Perhaps we’ll agree he’s that nose picker that sits in the back of the classroom making sculpture out of his boogers. Certainly Spring Breakers is a gross and glorious mess not soon forgotten.