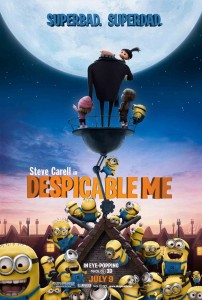 Despicable Me is not a Pixar film.  It is not Toy Story where adults and children alike can be swept away into a colorful computer-animated world, both generations equally entertained by the multi-layered storytelling.

Despicable Me is also not a DreamWorks Animation film.  It is not Shrek where kids laugh at the toilet humor while adults are mildly entertained by the endless barrage of modern pop-culture references.

No, Despicable Me is the first film from Illumination Entertainment, Universal Studios’ attempt to cash in on the computer-animated film market.  This studio also released the forgettable Hop and The Lorax (do you even recall either in theaters?  I remember The Lorax more from the “turn off your cell phone” ads than the film itself).

Like Illumination’s other two titles, Despicable Me focuses its energy entirely on the youngest segment of the audience.  Adults, and even older children, will be familiar with the tropes of the story in which a super villain named Gru adopts three lovable little girls to use as pawns in the crime of the century.  Nevertheless, while entertaining the children with bedtime stories and trips to amusement parks Gru finds his nefarious plot mattering less and less while these children become more and more important.  The climax of the film is will Gru steal the moon, or will he give up that lifelong dream and attend the children’s Swan Lake ballet.

Gru’s crimes are so soft-core that never is a person hurt, his primary crimes seem to be using a freeze ray to cut in line at the coffee shop while driving an obnoxiously large vehicle.  He is more a comment on Hummer-driving, Starbucks swilling suburbanites than criminals.

Given this, I found myself relating very much to Gru in a scene where he is forced to read the three children a bedtime story.  “This is literature?” Gru exclaims in disgust, “A two year old could have written this!”  Indeed, Gru could be speaking about his own film.

More, an A-list voice cast is wasted.  Every role feels written for a different, less famous actor.  In the lead role of Gru is Steve Carell.  Gru does not speak in the oddly-inflected stammer that is Carell’s trademark in films like The 40-Year-Old Virgin, Anchorman, and Dinner for Schmucks.  Instead, Carell adopts his worst brogue accent.  In voice and in inflection he comes across as a poor man’s Mike Myers.  Jason Segel is unrecognizable voicing Gru’s nemesis Vector–twisting his windpipes into a lame Andy Dick impersonation.  Even astute audience members will only be able to discern Russell Brand as he voices the one character with an English accent, his voice affected (or digitally altered) to the point of sounding like any generic Cockney. 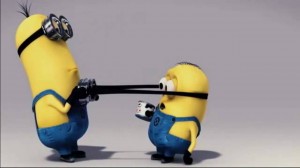 But despite breaking no ground in storytelling, Despicable Me is not without its charm.  While the primary plot and the characters of Gru and the children are all adequate, the film’s spark of originality come from Gru’s minions–a drove of mostly indistinguishable short, yellow creatures that aid Gru in his plots.  They speak in unintelligible babble, but their giant eyes, wide smiles, and good nature light up the screen (sometimes literally).  They engage in wacky slapstick, dressing up in human clothes to go shopping, and engaging in Gru’s wild experiments.  It is physical, silent comedy in the tradition of Charlie Chaplin and Buster Keaton.  Their jokes come in a rat-a-tat manner while also including wonderful callbacks.  The creatures also have a blind adoration of their master, which makes them lovable like pets.   I was far more satisfied at the end of the film by the minions finding their place in Gru’s heart than the three generic children.

It is no wonder that the ads for Despicable Me 2 focus so much on the Minions while the three little girls are nowhere to be seen.

For all its hackneyed, recycled plot devices, Despicable Me is far from despicable.  Young children ignorant of common story tropes will undoubtedly be entertained.  Adults will find enough here to pass the time, if not hold their full interest.  I give this film a mild recommend for adults, and while I will be skipping Despicable Me 2 I anxiously look forward to next year’s Minions film.

When not gushing over the cuteness of Minion bobble-heads Arnie is co-host of the movie review podcast Now Playing.