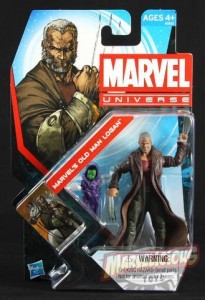 If you’ve attended San Diego Comic-Con International you know Marvel’s booth is a must-see.  From a large Avengers stage to a life-sized Iron Man 3 Hall of Armor, the visual spectacle is awe-inspiring.  In addition to the superstar comic creators that sign at the booth, celebrities like Stan Lee and Chris Evans have made appearances.  And collectibles abound from free iPhone cases to limited posters, comics, pins, and more.

In 2013 Marvel is expanding their booth presence further with The Marvel Shop. The shop will have limited edition collectibles for sale, as well as a highly sought Hasbro Marvel Universe figure–Old Man Logan.  First revealed at San Diego Comic-Con in 2012 the figure was expected to be released at New York Comic-Con, and Hasbro gave samples out to press covering their New York Comic-Con event.  However Marvel did not have the figure at the convention and, short of spending over $200 for one on eBay, the figure has remained a mystery.

Marvel has now revealed at at The Marvel Shop if you subscribe to Marvel Unlimited, the Marvel Comics digital comics subscription service, you will get the Old Man Logan figure for free.  More, Old Man Logan is the first Marvel Universe figure to have an announced edition size–only 3,000 of this figure will be made.

The Marvel booth at San Diego Comic Con International is back! (Booth #2329) Marvel will be taking the event by storm and aims to make this year one to remember! Along with all of the great on-stage panels, creator signings, and special events, Marvel is offering some fantastic new and exclusive merchandise that will be for sale at the booth (while supplies last), including T-shirts, glass tumblers, Blu-ray DVDs and more! Be sure to stop by and check the booth out, as supplies will be limited.

Here is a list of items that will be for sale: