March Marvel Madness Will Prove Which Hero is Mightiest

Since the dawn of heroes, fans worldwide have speculated about who would win a head-to-head match…

“Captain America would win a fight with Daredevil!”

“Hulk would win a fight with Iron Man!”

“Howard the Duck would win a fight with Vision!”

Now, you get the final word.

We’re pitting the stars of Marvel’s cinematic and television universes against each other in a bracket battle for the ages, and YOU will decide the victor! Fill out your bracket, choose the winners, and vote here on the Venganza Media Gazette. As heroes fall, the field of 32 will be whittled down until the champion is crowned on April 4. 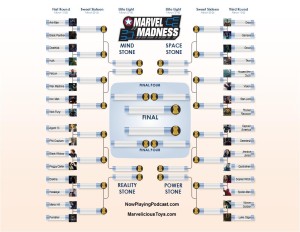 Post your bracket at the Marvelicious Toys and Now Playing Podcast Facebook pages, and tell everyone why you think Maria Hill will win it all! Really, if you’ve got Hill going No. 1 we must know why.

Maria Hill vs The Punisher