Halloween 35th Anniversary Blu-Ray: The Night HE Looks Better Than Ever! 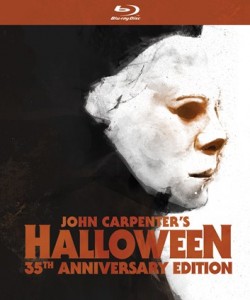 If Psycho is the granddaddy of the slasher film, Halloween is the father of modern horror.  While the 1970s had its fair share of horror films, including The Texas Chain Saw Massacre and Black Christmas in ‘74, Carrie in ‘76, Dawn of the Dead in ‘78 and so many more, it was Halloween’s critical and box office success that put a new spotlight on horror cinema.

For many the Halloween season is a time to rewatch Halloween the film, and this year you can watch John Carpenter’s classic like never before.  On Tuesday, September 24th, Anchor Bay releases the 35th Anniversary Edition of Halloween on Blu-ray.

Halloween has been released to home video many times.  I personally have bought DVDs of the original cut, the longer cut with the TV footage added, the 25th Anniversary Edition DVD, and the original 2007 Blu-ray release.  Given that I’ve spent so much money on Halloween, and that I already owned it on Blu-ray, I was skeptical that another release would be worth the purchase.  It felt like another “double dip” Blu-ray release.

I quickly learned how wrong I was when I looked at the disc in person.  Bound in a gorgeous, gold embossed DVD case, the video boasts an all new commentary with Carpenter and star Jamie Lee Curtis.  There is also a new documentary following Curtis as she makes a rare appearance at a fan convention.  These are great new bonus features for fans of the film.  Additionally, as bonus features,  you get an older featurette and the extra footage shot for the TV release.

I rarely find bonus features worth the repurchase of an entire movie, so despite the quality of these new additions I was still unmoved that a new copy was worth a buy.  Special features, commentaries, these are items I watch once at most; it’s the film itself that gets played time and again in my home theater and which motivates my purchases.  So could this new release impress me enough, especially since I already own a copy of Halloween in 1080p?

The answer is an unequivocal “YES!”  With the 35th Anniversary Blu-ray you can see this horror classic at home like never before.  I have seen Halloween in theaters at conventions and in the above listed DVDs and Blu-rays.  With all of those in mind, I say without a doubt it has never looked better to me than it does on this video release.  The picture is crisp and the motion smooth, as I have come to expect from high-grade Blu-rays.  But often on even quality Blu-ray releases I’ve noticed colors that are too saturated or a picture that has had too much grain removed, giving the entire film a blurry quality.  None of those earmarks of Blu-ray audience pandering are on this disc.  This Blu-ray contains a brand new transfer of the film overseen by Dean Cundy, the movie’s original Director of Photography.  You are now, for the first time, able to see this movie the way Cundy envisioned it as it was shot, and the difference is marked.  The colors are more muted than I’ve come to expect, and the result fits both that 70s vibe as well as the film’s atmospherem.  The color timing was a point of contention for many with the original Halloween Blu-ray release, and Anchor Bay has certainly corrected it here.  Anchor Bay did this film a great service in hiring Cundy to oversee the video.

Additionally the audio is perfect, with a mono score for the purists, as well as a 7.1 TrueHD lossless soundtrack.  Carpenter’s haunting piano and synth score has never sounded as good as it does here, and the movie audio is rich and immersing.  The effects are a bit center-channel heavy, which is common for upmixes of older films, but it’s a great effort for those of us who prefer multi-channel audio.

All that said, there are a few areas where I wish this release was beefed up.  There are many bonus features that were released previously, including older commentaries and documentaries, that are not included here.  As such, for bonus feature collectors, this release is not a one-stop shop.  Additionally, the bonus made-for-TV footage is presented in an ugly DVD resolution with colors much more saturated than the actual film.  I would have liked to see the TV footage given the same treatment as the movie and a branching option available to watch both the movie’s extended cut, with those scenes reintegrated, as well as the original theatrical cut.  But while these are features that would have been nice to have, they are not requirements.  As I’m certain this is not the last time HE will come home on video, perhaps these bonuses are being held back for a future release.

But as stated, the true value of this disc, the “feature” I’ll revisit again and again, is the movie, and now owning this disc this is the only version of Halloween I will ever rewatch.  The transfer, the audio, the overall production values, are exceptions.  So Trick-or-Treat yourself to this movie, available today.

As for the movie itself, you can hear Stuart, Arnie, and Brock review Carpenter’s original Halloween as well as all the sequels, remakes, and sequels to remakes in the franchise, in the archives at NowPlayingPodcast.com