Blade: The Series – Season 1, Episode 1: Pilot (The House of Chthon)

The pilot episode of the Blade series has been released as a movie on DVD three times.  The first was right after the series was canceled, released alone as Blade: House of Chthon.  Then it was included as part of the Blade TV Series box set.  Now it is available as part of a Blade 4 Movie DVD Pack where you get the three theatrical films, as well as Blade: House of Chthon.

As such, it was given serious consideration for inclusion as part of the Now Playing Blade Retrospective Series.  While we normally shy away from TV movies, we did delve into some for Marvel and have more on the horizon, so this would be natural for inclusion.

But then I watched Blade: House of Chthon and I must say to all the folks who work at New Line/Warner Bros. marketing: shame on you!  How dare you pass this off as a self-contained film?  And more importantly, how dare you release it not once but twice as a stand-alone film and not give the rest of the series?

I want to make it clear right now — Blade: House of Chthon is not in any way, shape, or form a self-contained story.  When I sat down to watch it, I sat down intending to see a movie that would stand alone.  This does not!

Screenwriter David Goyer is the man I credit the most for bringing Blade to the big screen.  While directors rotated in and out of the franchise, Goyer was a constant who produced many drafts of each film and even stepped into the director’s chair for final installment Blade: Trinity.  He is also the one responsible for bringing Blade to television, bringing on his friend and writing companion Geoff Johns to help with the writing duties.

Despite his work on the Nick Fury film, I think Goyer is a gifted writer with a knack for genre films.  I’ll cover the Blade films more extensively over at Now Playing, but let me say I was excited to see Goyer’s name attached to the TV spin-off and hoped that meant a continuation of the quality we’d gotten on the big screen.  But in writing this pilot, Goyer was very smart — he knew that this Blade was a TV series, and what we have with Blade: House of Chthon is a pilot for a TV series, not a movie. 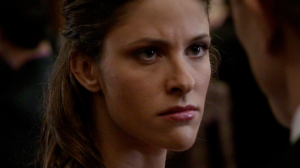 Wagner plays new heroine Krista Starr, who seems to have only one emotion--petulance

Why do I keep hammering that distinction?  It’s very simple:  If you go to a Blade movie, you obviously want to see Blade.  Sure, in Blade: Trinity you may have gotten a bit too much of the Nightstalkers, but Blade was still the driving, central force.  In Blade: House of Chthon, the star is Krista Starr, played by current Teen Wolf star and Wipeout host Jill Wagner.  Krista is a Iraq war veteran who returned home to Detroit after her twin brother was murdered.  When the cops seem unwilling to investigate, Krista takes it on herself to find out what happened, and she discovers her brother was a Familiar to Marcus Van Sciver – a wealthy and charismatic vampire whose public face is that of a real estate developer helping to reinvigorate Detroit.

Also after Marcus is Blade, and his new weapons-maker Shen.  But this is really secondary to introducing us to Krista – her family, her motivations, and her induction to the House of Chthon by Marcus.  We get to watch Krista as she takes that familiar journey of going from “there’s no such thing as vampires” to accepting them, and discovering her brother’s role in their organization–a role that ultimately got him killed.

Unfortunately Wagner’s acting here is one-note and bland.  I’m not sure if it’s the actress or the script, but Krista is given one note to play, and she plays it repeatedly.  Whether arguing with corrupt cop Boone, rebelling against Blade, or fighting with Marcus, Wagner has a permanent sneer on her face and, despite her character’s supposed military background, she carries herself with all the menace of a beauty queen who’s lost her lipstick.

You know what the Bible says about movie stars taking bit parts in TV pilots? It's against it.

But Wagner is given one priceless scene when she seeks out info from local vampire expert Professor Melvin Caylo, played by erstwhile Uncle Eddie, Randy Quaid.  Quaid was almost unrecognizable in this role, looking a bit more puffy than I’m used to seeing him, and I wonder if perhaps he was just in Vancouver looking for an apartment should he ever need to flee the US when the call came up to cameo in this pilot.

But in the end, this pilot does exactly what it should–it introduces us to new characters, as well as setting up ongoing conflicts such as Marcus’ right-hand-woman Chase who is both jealous of Krista’s new place as Marcus’ favorite vampire, and also perhaps has an eye on Marcus’ position in the house.  We also meet Detective Boone, a crooked cop who is betrayed by Marcus and turned into a vampire.  And thus begins a story that will be played out over the course of the entire TV season.

In addition, this episode teases us with Marcus’ plans to engineer a vaccine that makes vampires impervious to their weaknesses, such as sunlight and garlic.  While a good hook, it seems to be a crutch that Goyer leans on a bit too often as this was the primary plot of Blade II and a more minor plot point in Blade: Trinity.  Yet it seems Marcus believes he is the first to try and create such a super-Vampire.  A reference or two to the reapers to tell us Goyer knows we’ve seen this before would have been nice. Instead it just feels like a weak retread of old plots.

And it seems Goyer is not just stealing from his own old script ideas, this pilot also sets up that vampire ash is a new street drug, which basically turns humans into Blade, having the strengths of a vampire.  This seems stolen directly from Charlaine Harris’ Sookie Stackhouse Novel series, in this case replacing blood for ash, though Goyer does also give ash users a thirst for blood which causes many to eat their own fingers. 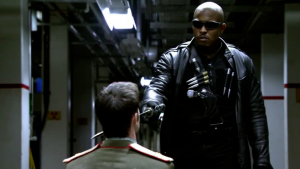 Kirk Jones may have "Sticky Fingaz" but he does not steal the show with his portrayal of Blade.

But with all of this, where is Blade?  Played now by Kirk “Sticky Fingaz” Jones (and I don’t want to know how he got that nickname), Blade is a virtual non-entity in this pilot.  The opening in which Blade gets to rough up a couple people in poorly-choreographed fight scenes was tacked on in post production, producers perhaps realizing there was no Blade in this Blade series.  Blade cameos from time to time – coaxing Krista to spy on the House of Chthon or engaging in the poorly staged climactic fight.  But any fan of the character is bound to be disappointed by how little their daywalker hero is featured in this first episode.

Jones, inheriting the character from Wesley Snipes, does about as much with the character as Snipes did–a lot of glowering and not much true acting.  But without Snipes’ blackbelt to back him up the only battle this Blade might win is a rap battle, so we are left with quick-cut poor action when we get Blade at all.

So do I recommend this Blade TV pilot?  My initial reaction to it was “absolutely not, this is awful” but that reaction was based on false expectations.  From the marketing I expected this to be a self-contained Blade movie, similar to so many two hour TV movies that eventually become series, like the original Incredible Hulk pilot or the pilot to Knight Rider.  But having had time to digest and, yes, watched this again with those expectations reset, I say that it’s impossible to give this a ranking as it’s two hours of a 12-hour saga.  I certainly don’t recommend this as a stand-alone movie, do not watch this if you never intend to watch the rest of the series, but as a single installment in the series?

Well I guess I’ll have to watch the rest of the series to see if it pays off, because given the structure of this pilot it’s all or nothing; the pilot does not work as a movie.