On Now Playing Podcast my co-hosts Stuart and Jakob often joke about my affinity for romantic comedies, or “RomComs.” I don’t mind the jokes. After all, it does seem that I tend to go to this lighthearted genre whenever discussing works of actors and filmmakers.

A History of Violence star Maria Bello? First saw her in Coyote Ugly and loved her in The Cooler.

I researched the work of The Wolverine director James Mangold by watching the atrocious Kate & Leopold.

Even mo-cap pioneer Andy Serkis — we actually see his face in 13 Going on 30.

The list goes on and on. I never analyzed my proclivity for these films, but the repeated jesting had me reflect a bit on why I spent time watching them in the first place. It quickly became clear that I chose to see those movies and more because of When Harry Met Sally.

When Harry Met Sally was released in the summer of 1989, which, at that point, might have been the biggest moviegoing summer in Hollywood history. Films like Star Trek V, Indiana Jones and the Last Crusade, Batman, Ghostbusters II, and Back to the Future Part II were all unleashed within weeks of each other.

With these blockbuster heavy-hitters on the calendar, Rob Reiner’s romantic comedy was not the No. 1 film on my “must see” list, but it was up there. 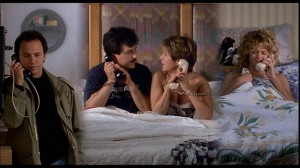 Part of the draw was the talent involved. I had liked Meg Ryan in Innerspace, and, although I was too young to appreciate the genius of Soap, Billy Crystal had really impressed me with Throw Momma from the Train.

But the biggest draw was Reiner. While I grew up watching “Meathead” on All in the Family, I’d already come to respect him as a director after seeing Stand by Me, The Princess Bride, and even the John Cusack comedy The Sure Thing.

Also, if I’m going to be completely honest, there was another big draw: Sex.

I was in my early teens and dating was a frustrating, confusing experience. I was also learning about sex through government-mandated public school health class as well as… extracurricular materials. As a boy desperately wanting to gain insight into the female brain, this film seemed like a wealth of knowledge.

The trailers teased wise phrases such as “Men and women can’t be friends, the sex part always gets in the way.” Was that true? It boggled my adolescent mind to ponder.

And there was the clip of Meg Ryan performing Sally’s fake orgasm in Katz’s Delicatessen. Yeah, I really wanted to know more about that!

Getting into the theater was a tricky proposition for someone three years shy of the 17-year-old threshold for R-rated films. I eventually convinced my prudish 21-year-old sister Michelle and her husband to take me.

I know that at 13 I didn’t get all the jokes or understand the subtle nature of some of the humor (I also totally didn’t recognize “Princess Leia” Carrie Fisher as Sally’s best friend Marie). Still, I was taken by this film and its world.

Crystal was funny and salacious as Harry. I was won over by this libidinous lothario early on,  during the car ride when Harry propositions Sally despite the fact that he’s dating her best friend. Crystal’s timing is spot-on. In the hands of another actor this type of introduction could have alienated the audience, but Crystal’s light hearted delivery, his sparkling eyes, and his disarming smile made Harry the type of character men could root for and women could come to love.

As Sally, Ryan gave the performance of her life. I developed a major crush on Sally and, due to this, I saw most of Ryan’s work. The success of this film made her a hot property, but from Flesh and Bone to I.Q. to The Doors, no performance she has ever given comes close to matching the one she gives here. 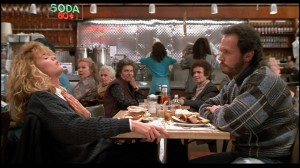 I believe part of this is because of the way Ryan threw herself into the role, right down to the deli orgasm scene. While some actresses may have shied away from such an extreme moment, this scene was actually Ryan’s idea. With physical comedy, self-effacing stumbles, and great delivery, she gave her all to When Harry Met Sally.

More, I think her co-stars, primarily Crystal and Bruno Kirby, were so amazing that Ryan’s game was elevated.

Thanks to the performances from the two leads and a script by Nora Ephron, Reiner created the perfect romantic comedy; one that appeals equally to men and women. The movie delicately balanced the two points-of-view and at no point while watching When Harry Met Sally did I feel I was watching a “chick flick.” To me it was just a comedy film.

Not only did this film make me fall in love with Sally; I fell in love with New York City. This was the first time I’d seen New York truly romanticized on screen. Sure, Ghostbusters, Splash, and Short Circuit 2 were among the many movies set in the Big Apple, but this film truly drove home to me the differences between New York and other cities where I’d spent considerable time, such as Chicago or Fort Myers, Florida. The use of cabs for transportation, the unlikely experience of running into old acquaintances in a city with 8 million residents, the difficulty of taking home a Christmas tree in a town that relies on public transportation — I saw it all for the first time in When Harry Met Sally. This was the first movie that I realized to be as much about a place as the people.

Reiner deserves so much praise for the way he structured the film; using holidays to show the passing of time, the split-screens during the four-way phone call, the rapid-fire quips — honestly, I could gush about this film for pages. It is one of those movies that just came together and made on-screen magic.

When Harry Met Sally is the perfect movie to watch between Christmas and New Year’s–a perennial holiday favorite.

This was my first foray into truly adult comedy, as compared to the Eddie Murphy comedy that just used adult language. When Harry Met Sally has adults dealing with issues of age, marriage, and commitment; and doing so in a funny way.

I left the theater still pondering the question of whether men and women can be friends; but I was certain that, through Sally, I’d gotten a glimpse into the workings of the fairer gender. I certainly didn’t know all I needed to know, but I felt that I’d been educated (through the film’s female perspective) as well as entertained (by the film’s male point of view).

I wanted to know more, and I wanted to laugh as hard as I did in that theater. Because When Harry Met Sally was such a success, the comedies of the 1990s and 2000s kept copying Reiner’s formula, and I watched dozens of them hoping to feel the same as I did in 1989.

I followed Ryan to French Kiss, Sleepless in Seattle, Addicted to Love, and many more hoping to see, but never finding, the magic she possessed as Sally. Only You’ve Got Mail came close.

I also followed Billy Crystal to the forgettable Forget Paris, but enjoyed his comedy more in City Slickers and Analyze This.

When neither Crystal nor Ryan repeated their success I tried to find this type of on-screen chemistry with other known actors. From Sandra Bullock and Bill Pullman in While You Were Sleeping, to Nicholas Cage and Bridget Fonda in It Could Happen to You, to several Friends stars in films best forgotten, I watched them all.

Most of them were terrible. 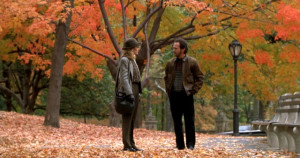 The colors captured in When Harry Met Sally romanticize New York City as only film can.

Not only did these movies lack the insight and wit of When Harry Met Sally, the genre itself slowly degenerated before my eyes. Initially the films would try to replicate Reiner’s delicate balance of romance and comedy, but in time they changed to focus far more on the romance, less on the comedy, becoming base female wish fulfillment. By the mid-90s the vast majority were, indeed, the “chick flick RomComs” that Jakob taunts me for watching. There were a few gems in the bunch, such as The Wedding Singer, There’s Something About Mary, Bridget Jones’ Diary and The 40-Year-Old Virgin, but, by and large, they were junk that left me bored.

But if I was not entertained, was I educated? Did this deep dive into the world of female-targeted cinema give me insights into women? Well, in the past 25 years I’ve learned a lot, and mostly it’s that everyone is a unique individual. My quest to learn some magic secret about “all women” was doomed to fail because each woman is her own person. I learned that not through film, but through dating and, eventually, marriage.

I also learned the answer to Reiner and Ephron’s main question — yes, men and women can be friends. The best marriages are those where the two are friends. I feel lucky to have that where my best friend is my wife.

So maybe When Harry Met Sally taught me something after all.