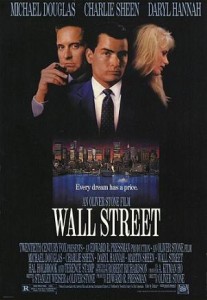 Why wouldn’t I want to go into that world? I grew up in the big 80s, the era of Reaganomics. Money was being flashed everywhere, and it wasn’t just the musicians and actors who had rich and famous lifestyles; there were also names like Ivan Boesky, Carl Icahn, Jordan Belfort, and Donald Trump.

My godfather, who rode the stock market to a healthy retirement, told me that the brokers had the best gig — no matter if their clients won or lost, the broker got the commission.

What did I really want to be when I grew up? I wanted to be rich. I saw the stock market as the avenue to that lifestyle. When I turned 13 I even became a stock owner, my godfather buying me some shares of Ohio-Edison.

That dream crashed in 1987, starting with Black Monday, when the Dow Jones Industrial Average dropped 508 points (which would still make headlines today, but back then it was almost 25 percent of the Dow’s value). I heard stories of broker suicides and rich people in ruin. My faith in the avarice of the economy was shaken. 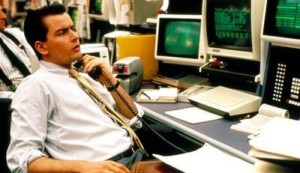 As a child this wasn’t how I envisioned the job of a stock broker.

It was broken entirely two months later when I saw Oliver Stone’s Wall Street. I had looked forward to that film for months. I didn’t know much about Stone (I hadn’t yet seen Platoon), but I knew his name and his Oscar-winning reputation.

Had I researched the man further I would have known that Wall Street wasn’t going to be what I expected, which was a more realistic version of The Secret of My Success.

Instead I saw a film to which I could relate a bit too well. Charlie Sheen played Bud Fox, an up-and-coming broker barely making ends meet. The early scenes that give you a glimpse into the life of the average, front-line broker did not depict the glamorous lifestyle I’d seen on television — it actually looked like Bud might have earned less than a talented bartender.

The high-pressure nature of the business and the cold-call sales techniques combined to make Bud hungry and bitter. Even as a kid I could relate to him; his drive to get out of the phone pool and make a name for himself. 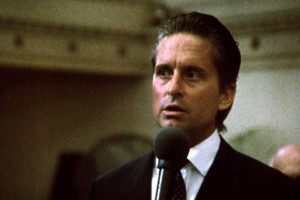 But then we were introduced to Michael Douglas as Gordon Gekko. I had seen Douglas a few months earlier in Fatal Attraction and thought of him as a good guy. In Wall Street he’s a ruthless, wealthy businessman, but I envisioned him almost as a guardian angel that would show Bud the road to riches.

Instead Gekko turned out to be a greedy, deceitful, vengeful criminal. He corrupted Bud with promises of women and riches until the young businessman betrayed his own father in service of his mentor.

Bud redeemed himself — he came up with a plot to save his father’s company — and served time for his misdeeds, but as Sheen’s character was taken to prison I found myself finally questioning this lifestyle I had coveted for years.

Stone told the story exactly how it should have been told in 1987; show the flash, the cash, the allure of riches in the big 80s. Then show the cost, including the broken relationships, the drug hangovers, and the realization that Bud’s “friends” (and even his girlfriend) all disappeared when the money was gone. 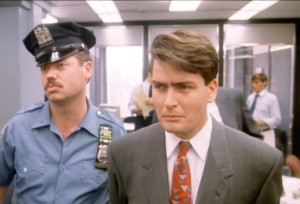 This was the image that struck me hardest from the film. Not the penthouse, not the girl, but the consequences.

This was a movie with a social commentary, and one that should have been made louder and more often in the 80s. The “Greed is Good” mentality prevailed as the economy boomed, but while the success stories got the press, little attention was paid to the illegal and immoral activities undertaken by so many to achieve those ends.

More, the film could not have had a luckier release schedule, if you can ever call Black Monday “lucky.” The stock market was on everyone’s minds and tongues, questioning this ethereal concept of non-liquid assets in a grand trading scheme. Stone’s message rang true, for a period.

I now feel the message of Wall Street has been lost. The stock market is more vital to the lives of Americans than ever thanks to 401(k) plans and other reliances. Despite the crash of the NASDAQ at the turn of the century (when several of my close friends lost everything) and the crash of the Dow in 2007, it seems Americans still like to play the market like a Blackjack table.

More, Gordon Gekko and his “Greed is Good” speech have become lionized by today’s hungry, young businessmen. Even this year’s The Wolf of Wall Street seemed to play up the glamour of Jordan Belfort’s illegally-funded lifestyle rather than focus on the victims he snookered. 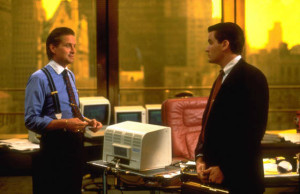 “Please allow me to introduce myself. I’m a man of wealth and taste.”

Had Stone been a different filmmaker and Wall Street a more Wolf-ish tale perhaps my ambitions would have redoubled. I might be a very wealthy man today, or I might be in prison. Fortunately I saw the right movie at the right time. In 1987 and now, Stone’s message rang true. I went in wanting it all, and I left the theater a boy without a goal, perhaps slightly more normal for that.

For that life-changing course — setting me on a path where I would end up helping people by day and entertaining people by night — Stone’s film will always remain a profound symbol of how art can change the direction of your life.

Not all films are pure entertainment, the best ones raise questions as well.