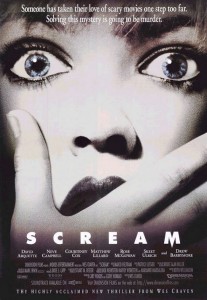 As I mentioned in previous reviews of Love at First Bite and Hellbound: Hellraiser II, I have always been a horror fan.

As a very young child I loved the fear I felt toward forbidden cinema, and as I aged I came to see the humor, thrills, and scares in the genre. In my 20s, though, my love of horror changed. I had grown up and no longer had exciting nightmares starring Freddy Krueger. To me, there were no more mysteries in the world, and no more scares to be had on screen.

This problem was exacerbated by a lack of exciting horror in theaters. The slasher craze of the 80s had waned with Friday the 13th Part VIII: Jason Takes Manhattan and Freddy’s Dead: The Final Nightmare. By the early 90s the genre seemed to be gasping its last breaths; Jason Goes to Hell: The Final Friday was the 1993’s top-grossing horror film with only $15 million — nearly tying Manhattan’s $14 million for a series low. A year later the only notable horror release in theaters was Wes Craven’s New Nightmare. By the time The Mangler and Halloween: The Curse of Michael Myers came and (quickly) went, it seemed the bloody fun of the cinema was gone.

At the same time Hollywood was failing to launch new horror stars on screen. The first Leprechaun was released to little fanfare, and audiences simply laughed off Dr. Giggles.

I still enjoyed horror where I could find it, but that was mostly on direct-to-VHS releases. There was the occasional gem, such as Return of the Living Dead 3, or Tales from the Crypt Presents Bordello of Blood, but it was largely a parade of dreck.

I thought horror was dead.

But like any good villain, horror came back from the dead in the holiday season of 1996. The best gift I received that Christmas was an unexpected revival! Suddenly horror was cool again, and the film that made it happen was Scream.

If Ghostface had narrowed the scope to “What’s your favorite scary movie from 1990 to 1995” I think his victims would still be trying to find one.

Even though I’d let my Fangoria subscription lapse, I’d kept up with horror film production in the 90s. I knew that Wes Craven, creator of the A Nightmare on Elm Street franchise, was working on a new slasher film… and I wanted nothing to do with it.

Though I idolized Craven growing up, due exclusively to the Nightmare series, the director’s later works were crap.

I was unimpressed and felt betrayed by Craven’s incoherent and bloodless 1989 slasher Shocker — though I have since come to love the film for the over-the-top “schlocker” that it is. Then in 1991 I raced opening weekend to see The People Under the Stairs, and was simply bored.

I still didn’t learn. I became ecstatic when I heard Craven’s next film would be a return to the Elm Street series, the director promising to make Freddy frightening once again. When I walked out of Wes Craven’s New Nightmare I felt I had seen my last Craven film. You can hear my full New Nightmare review in the Now Playing Podcast archives, but I truthfully wondered how I ever idolized this man who seemed able to only make terrible movies.

That line of thought was cemented with 1995’s Eddie Murphy horror comedy Vampire in Brooklyn, a film I saw out of devotion to Murphy, not Craven.

So in 1996, hearing Craven was going to make a new horror film was actually a turn-off. In ‘96 I would have rather gone to theaters to see Lawnmower Man 2: Beyond Cyberspace than Craven’s Scream.

Scream turned Barrymore into an A-list star once again.

The cast did nothing to change this impression. Press materials touted Drew Barrymore’s role, and that seemed a bad sign. Back then she was still the little girl from E.T. who, like so many child stars, had developed a dependency problem. While I had seen her work in Boys on the Side and Mad Love I thought her heyday was behind her; the only roles she had in major releases were bit parts in Wayne’s World 2 and Batman Forever. She seemed “over” in Hollywood. I would never have guessed that, thanks to Scream, Barrymore was poised for a return to superstardom.

The rest of the cast — actors I’d not heard of or knew only from television shows — also failed to grab my attention. The only cast member that caught my interest was Matthew Lillard, whose zany performance I’d loved in Hackers, yet that was not near enough for me to want to see this movie in theaters.

Most of all, the film’s trailers didn’t hook me. I thought the killer’s mask was silly — had Michael Myers and Jason Voorhees taken all the good killer masks? I admit I was intrigued by the thought of characters that knew horror movie tropes; I mean, this was a horror movie where the characters were people like me. Still, with Craven’s name on the poster I wanted nothing to do with it.

Lillard would go on to the Scooby Doo films after himself being unmasked as the bad guy in Scream.

I saw Scream in theaters only because I was invited by a group of friends and my options were to go to this movie or stay home alone. I wasn’t happy about going, and I anticipated a wholly miserable People Under the Stairs type of experience.

To say I was won over is an understatement. The film did have a good deal of true horror, with the opening murder scene a suspenseful highlight. With the scares firmly established, the movie achieved a near-perfect balance between self-referential humor and legitimate tension. While, due to my age, I was not afraid, the film did succeed in making me jump a couple of times.

In 2011 I gave my full review of Scream as part of our retrospective series leading up to Scream 4, so I will not repeat myself here. You can listen to that full review for a blow-by-blow analysis by Stuart, Marjorie and myself.

In short, not only did Scream win me over; I feel it is Craven’s best film — even better than my beloved A Nightmare on Elm Street.

I believe Craven was greatly assisted by the script from first-time screenwriter Kevin Williamson. Having seen many films made from Craven-penned scripts, none come near Scream in terms of plot twists, fleshed-out characterizations, and careful plotting. The movie was a whodunit, something I didn’t expect in a slasher. After all, in most slashers I knew the killer was Freddy or Michael or Jason or Chucky. That the killer was one of the kids was a fun experience — me trying to outwit the characters and peg the killer. When the mask is removed and the full story revealed, even I was taken aback by some of the twists. This is all Williamson, and I give him full credit for the film’s quality. 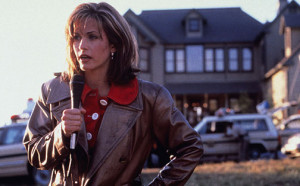 I watched Friends, but never saw Cox as a good fit for horror. Again, I was wrong.

Yet I cannot overlook Craven in the director’s chair. While the script was great, Craven brought two decades of horror experience to Scream. He knew how long to hold a moment, how to reveal a body, and how to build tension that would climax with a jump scare.

My heart was racing as I left the theater. This was the first great original horror film I’d seen in many years, yet had I known the long-lasting impact Scream would have, my exuberance would have been even greater.

The movie went on to make nearly $175 million on a $15 million budget, reminding Hollywood that a good horror movie can provide substantial returns.

Scream single-handedly revived the entire horror genre. The next year gave us not only Scream 2, but also — thanks to Williamson’s success — the enjoyable, but forgettable, I Know What You Did Last Summer.

We also got the Wes Craven-produced Wishmaster, which I saw in theaters and found a weirdly awful throwback to the days of Leprechaun.

By 1998, other studios had caught on and the post-modern, self-aware horror film had its heyday with Bride of Chucky, Halloween H20, Urban Legend and The Faculty. The quality was mixed, but all were far better films than Lawnmower Man 2 or The Curse of Michael Myers.

Scream made me appreciate Craven’s ability, but even more its success spawned dozens of films I’ve enjoyed over the past 20 years. For that reason alone, if not just for the movie itself, Scream might just be my favorite scary movie.