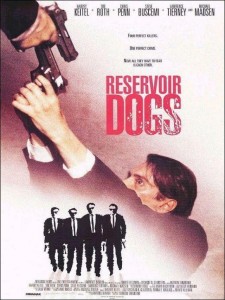 Throughout the 1980s American cinemas were dominated by blockbuster, event movies. They rose to prominence in the 70s, starting with Jaws and then Star Wars. By the “Big 80s” big films were the ticket, and the modern movie marketing machine began to form.

By the end of that decade, though, a counterculture of film had started to gain prominence — the indie picture. While this type of low-budget filmmaking was as old as movies themselves, the indies rarely received the publicity and the press afforded to large, studio films. That tide started to turn, in part due to the rise of the Sundance Film Festival in the mid-to-late 80s. Steven Soderbergh achieved critical mass with Sex, Lies, and Videotape in 1989. That same year Jim Sheriden’s My Left Foot was nominated for several Academy Awards, pushing star Daniel Day Lewis into the spotlight.

Both films were distributed by Miramax Films, a studio whose name would be at the center of the 90s indie movement. Studio heads Bob and Harvey Weinstein focused on distribution of smaller independent and foreign films. and the success of those aforementioned 1989 gave the Weinsteins a bully pulpit and legitimacy as they expanded their empire.

While I spent my senior year of high school watching big-budget fare like Lethal Weapon 3, Batman Returns, and Basic Instinct, even at age 17 I could see the shift was happening. I was regularly reading movie and entertainment magazines and following the careers of many actors and directors. I was aware of these low-budget films. Being the teen I was, I tried Sex, Lies, and Videotape, and found it to be much more dull than the titillating title had teased.

The image that sums up the movie perfectly–men ready to shoot each other.

Although I’d been consuming all of this media, I don’t remember ever hearing about a little film called Reservoir Dogs or its director, Quentin Tarantino. It wasn’t until 1993 — a year after its release — when my lifelong friend and Now Playing Podcast co-host Stuart turned me onto the film.

I had wanted to see True Romance, the 1993 Christian Slater crime film from Top Gun director Tony Scott. I missed it due to friends not wanting to see any film starring Slater post-Kuffs. Thinking I knew Stuart’s taste in film — he certainly was no fan of Slater — I didn’t even ask him, so I was surprised when he later told me he had already seen it and gave it a positive review. He even went out of his way to compliment Bronson Pinchot, of all people, while discussing the movie.

He told me the film was written by the guy who made his directorial debut with the film Reservoir Dogs. As I missed seeing True Romance in theaters (it was only in our town for one week) I immediately went out and rented Dogs with no idea what to expect. I’m not sure I even knew it was an indie film.

I was immediately drawn in. The opening scene had me laughing as the characters sat around deconstructing the lyrics of Madonna’s “Like a Virgin.” The slo-mo opening credits sequence, set to George Baker Selection’s “Little Green Bag”, had me grooving to a song that I hadn’t heard in almost 20 years. These guys were already so cool in their black suits, narrow ties, and sunglasses, and the movie hadn’t even really started.

Reservoir Dogs is really a whodunnit, only we aren’t looking for the identity of a killer, but a rat. Somewhere in this group of cool criminals was an undercover cop. When their jewel heist went bad some members of the gang were killed. The survivors gathered at the designated meeting point, but all are on edge wondering who was the turncoat.

The mystery is revealed through a series of flashbacks. Each of the main villains gets their own sequence showing how they came to be part of the group. As we find out about each member they are ruled out as a cop — until we get to the flashback that makes it explicit. 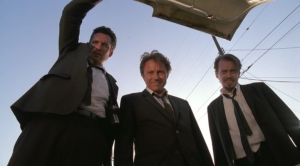 The camerawork in Reservoir Dogs was fresh and exciting. The steadicam following these dogs out of the building–the music fading behind them–was a technique I’d not noticed before watching this movie.

It wouldn’t be until years later that I would realize that through this structure Tarantino had revolutionized cinematic storytelling. Flashbacks were nothing new, but his copious use to unfold a story was uncommon and felt fresh. Today Reservoir Dogs has been copied endlessly — its structure was the template for every episode of Lost, plus hundreds more. Now I consider the flashback story a gimmick. Even Tarantino’s follow-up film Pulp Fiction continued this use, though, while the timeline of that latter film is not chronological, it is also not as scattered as this earlier work.

Watching this film I didn’t realize I was seeing a new storytelling structure that would permeate the mainstream. Through expert editing and story structure I was just drawn into Reservoir Dogs, without excess attention paid to the narrative. The dialogue, the characters, the mystery, it all had me.

Despite being a movie featuring murderous thieves, Tarantino found a way to make them likable characters. The opening scene in the diner, which helped establish a pecking order and general relationships, was a large part of that.

The flashback scenes also built upon this, showing a sense of family among many of the characters and their boss, Joe Cabot. Mr. Blonde (Michael Madsen, in his finest performance to date) is fresh out of prison having refused to rat on his employer. Still on parole, Blonde is afraid of going back. Joe, and his son “Nice Guy Eddie” (Chris Penn) set Blonde up with a fake job and a sense of security, before they do the job.

Likewise Mr. White (Harvey Keitel) is a longtime associate of Joe’s and flashbacks firmly establish their friendship and camaraderie.

The linchpin of the film, however, is Mr. Orange (Tim Roth). He gets the most flashback scenes, and here we get to connect with him outside of the crime family. Tarantino gets much praise for dialogue, and it comes through in these moments.

The sense of pop culture Tarantino put into the film is uncanny. Referencing songs of the 80s while bringing in music from the 70s, Reservoir Dogs clicked with a multitude of audiences. Yet, in a decade before Marvel films were popular, Tarantino referenced Fantastic Four as well — letting this teenage comic fan know a kindred spirit was behind the camera. 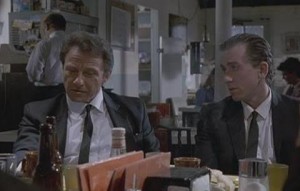 You give me a bad review in a dream you better wake up and apologize.

I also loved the way the soundtrack compiled these songs but, in between, included dialogue from the film. It was rare in 1992 to include anything other than music on a soundtrack. After Reservoir Dogs it became expected, until it — like flashback storytelling — became a tiresome and overused gimmick. With Reservoir Dogs, and then Pulp Fiction, Tarantino’s albums remain my gold standard for this trick.

Beyond all of that came my personal favorite character, the weasely, greedy Mr. Pink (Steve Buscemi).  His instinctive sense of self-preservation plus his sardonic sense of humor was all established in his very first scene–he doesn’t tip waitresses.  He cares more about his own finances than having compassion for the waitress, and tells this in a highly amusing way.  Pink was always my favorite of the Dogs, and for years I thought he, the least trustworthy of all the criminals on screen, was the only survivor.  Not only that, it seemed he got away with the diamonds!  It wasn’t until 1996 when I saw a limited-run theatrical rerelease that I heard the audio and Pink ended up like the rest of the gang–shot to death.

I can continue to heap praise on this film, and over its 22 year history many have. Yet much of what I appreciated came in retrospect. Watching this film the first time, I was just taken in, and perhaps a bit shocked. Reservoir Dogs is bloody, foul-mouthed, and raw. The casual amorality that Mr. Blonde exhibits when he pulls his captive police officer from the trunk, where the cop had been stored for quite some time, brings the blackest of humor. It is a moment beaten only moments later by Blonde’s torture of the man, set to the jaunty Stealers Wheel’s song “Stuck in the Middle With You.”

This film was my intro to Tarantino, and I was instantly a fan. True Romance solidified that. The next year my dorm room was a practical shrine to the director, with giant Mr. Blonde and Mr. White posters dominating my walls. These films entered heavy rotation, and greatly influenced my creative view. I started tooling with my own crime stories that, at the time, I considered original. Now I realize they were blatant Tarantino rip-offs.

Through my love of Reservoir Dogs I also discovered new directors who followed Tarantino’s path and broke into Hollywood with gritty, genre-bending crime films. From Bryan Singer with The Usual Suspects to Guy Ritchie with Lock, Stock, and Two Smoking Barrels, and even Reservoir Dogs co-writer Roger Avary’s directorial debut Killing Zoe. 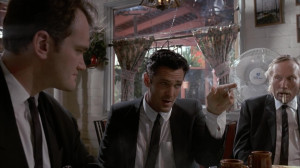 Tarantino pulled off the minor role of Mr. Brown, but he was not as fortunate in future acting gigs.

Tarantino opened the door for indie filmmakers to be taken seriously in the 90s. He also shifted my focus for the rest of the decade, causing me to seek out small films as well as blockbusters, and to sample new directors as well as return to those I already enjoyed.

In the two decades since Reservoir Dogs Tarantino has gone on to win multiple academy awards and put together a very respectable resume of films. There is no doubt the man is a talented director, and an even better wordsmith. Still, to me, his earliest work remains his finest. Even Pulp Fiction, his directorial follow-up to Dogs, became more complex and bloated.

Here, with only the bare essentials and a meager budget, he created a work of genius, and an inspiration to aspiring writers and filmmakers across the country. Including me.