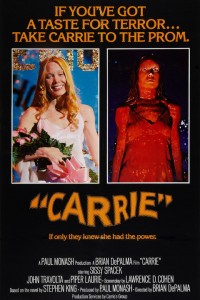 Last October, prompted by the release of the remake, Jakob, Stuart, and I reviewed 1976’s Carrie for Now Playing Podcast. It was the first film in our ongoing (with no end in sight) Stephen King Movie Retrospective. I came to that series a Stephen King fan, as I’ve followed his work since the mid 1980s. While researching Carrie for that review I realized I am likely only a Stephen King fan thanks to Brian DePalma’s film adaptation.

It’s not that I believe DePalma’s Carrie to be the best adaptation of a King novel, for proof you can listen to my thoughts in our Now Playing review. I think it’s a well-crafted and enjoyable film, but some poor characterizations and pacing issues prevent me from heralding it as the best King film to date.

King’s debut novel was published in April 1974, five months before I was born. Carrie sold well — especially in paperback — and secured the author a multi-book deal, but its overall performance was not exceptional. Even a year later, with the release of his second novel, Salem’s Lot, King was still not a household name. All of that changed in ‘76 when Carrie hit theaters. DePalma took that story, added his visual style and a Hitchcockian score, and the result was an Academy Award-nominated film.

I have no doubt that the success of Carrie in theaters gave King the boost he needed to achieve critical mass and have his first hardcover bestseller in 1977 with The Shining. 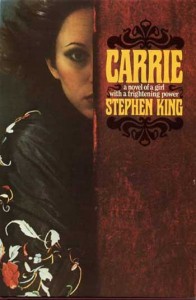 It helps that King is a prolific storyteller, and I’ve always believed his appeal comes from engaging stories filled with relatable characters. No cinematic success can turn a poor writer into one of the bestselling authors of all time. But with Carrie, a spotlight was shone on King.  He was exposed to a broader audience than the bookstore shelves could ever provide. De Palma opened the door and King had the talent to walk through it.

The result is publishing history. I grew up going to schools where it seemed every third student was reading a Stephen King novel. Not only were my friends engrossed in the pages, but the parents of my friends were also reading King. I was enthralled. As a child drawn to horror — and simultaneously terrified of it — I couldn’t not read these books.

The first book I read was Carrie, suggested to me by lifelong friend and fellow Now Playing host Stuart. A few weeks after finishing the novel I saw De Palma’s film for the first time, and I became a Stephen King fan. He was the first author whose name would make me immediately interested in a book.

King has published 64 novels — most of them bestsellers — as well as countless short stories, and I have read most of them. I continue to read King as I enter my 40th year, and will continue through my 41st, 42nd, and so on, until one of us dies. I’m also reviewing every widely-published Stephen King story on our Books & Nachos podcast. As I write this I’m also working on a review of his ‘78 masterpiece, The Stand.

And it all goes back to DePalma’s Carrie. Without that film, it’s possible King would have been one of 1,000 authors who publish countless books for their niche audience, but never gain widespread attention. That film was a cultural phenomenon that shaped me as a person.