Would You Rather Movie Review 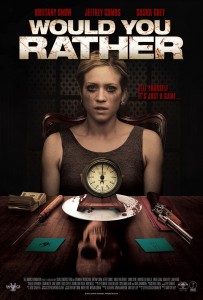 Once you RSVP, it’s too late…

Iris is dead broke after the death of her parents and desperately needs money.  She accepts a mysterious invitation to a dinner party that promises the chance to win enough money to solve her problems.  The party is hosted by Shep Lambrick (Jeffrey Combs), with the promise of one attendee winning money via an contest.  The game is revealed to be “Would You Rather”, the party game that forces you to choose between two choices.  Instead of choosing to kiss the their friend Martha or their friend Bob, the guests are astounded to learn that their choices are self mutilation or mutilating someone else.  As each round progresses with a new painful challenge, guests are eliminated either by fatal  injury or killed during an escape attempt leaving Iris and one other as the finalists.

Refreshing a stale genre, Would You Rather presents a new twist that is both unique and original.  The writers rely on implied gore to create the suspense.

The mutilating challenges all sound horrible and conjure graphic images but it’s a stark contrast to what is shown.  Lucas’s challenge is to slice open his eye.  We hear his resistance, see his panic at the thought but when he actually does it, it is so quick and shot at such an angle that there is no blood.  Peter’s challenge is to blow up a firecracker in his hand.  It sounds simple enough until it’s revealed to be a quarter stick of dynamite and that it is duct taped thoroughly to his hand.  When it explodes, the carnage is poorly lit so it’s impact is minimal and the focus is on Peter having a heart attack. Anything imagined is much worse than what is shown causing a much more intense movie.

Combs is delightful in his role as philanthropist turned sadist Shep Lambrick.  Known for his stoic portrayal of Dr. Herbert West in Reanimator, he is wonderfully chipper and animated in Would You Rather.  His delight and mockery at the moral dilemmas facing his dinner guests is fun to watch.  He munches on snacks while they decide who they are stabbing, shocking or whipping.  Combs doesn’t portray Lambrick as a maniac, he’s mostly a madman but with social skills.  Combs has such a delightful giggle when he is enjoying tormenting his guests. It’s nice to see him break out and have some fun, even if it is at the expense of others.