Turn Around, White Eyes – How The Incredible Hulk Traumatized Me For Life 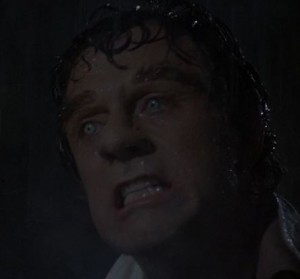 On many episodes of Now Playing Stuart has called out my phobia of anything related to eyes. Be it needles in eyes, eye surgeries, eyes popping from heads, any form of eye trauma has made me wince.  Sometimes my sphincter actually closes up when I watch something very grotesque and eye-related.  Some of my earliest memories are eye related, such as an episode of Dr. Who where someone had anti-matter eyes, or in Superman 3 where the robot woman opened her eyes and underneath was bare metal!  But I’ve never known why I have such an aversion to eye trauma.  But now, doing my reviews of The Incredible Hulk for Now Playing for the Venganza Media Gazette I think I have found the origin!

As a child of 3 or 4 Hulk scared the crap out of me. When I was 4 my godmother took me to a local toy store to meet superheroes. Guys were there in costumes, and I was pleased to meet Spider-Man, Captain America, and Superman.  To me I was meeting the stars from the TV series, too young to know the difference between fantasy and reality.

But also there was Hulk. And I was frightened. The image is burned into my mind 30-some years later–and looking back the costume was god-awful. It was this thing made of what looked like bent cardboard, and covered with green felt like a mini-golf course. The mask frozen in place…it was comical. But it was Hulk, so I hid behind my godmother’s leg, scared the creature would hurt me. All because of this TV show. I was as scared of Hulk as Carol Anne was of The Beast; as Tina was of Freddy.

So why did I watch Hulk if it scared me so? I love horror. Since preschool I have been fascinated with that which frightened me.  At age 3 I loved The Count best of all Sesame Street muppets because he was a vampire, and I wanted to know if he counted sheep in a coffin.  And every Friday at 7 I would face my fear of Hulk.

Some episodes were just too traumatic.  But even the most rote of episodes had me transfixed, and petrified, when Lou Ferrigno showed up.

But now I realize, what is it that preceded the Hulk?  What is the trademark first sign of the transformation?  David Banner’s white eyes!  The eyes went white, the clothes would tear, a low growl would erupt, and then a green, unstoppable force of terror would dominate my imagination as it did my television screen.

I imagine I will go to my grave freaked out every time I see something to do with eyes, but now I think at least I know why.