The Sweet 16 Heroes of March Marvel Madness have been selected!

The competition started March 15. Each day two pairs of heroes were plucked from the Marvel Cinematic Universe and competed head to head.  Marvel fans across the globe voted at VenganzaMedia.com and from the 32 contestants, 16 winners were chosen. 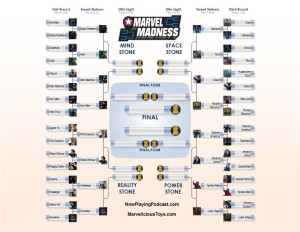 Now those winners go head to head, the victors advancing to the Elite 8, and you decide the results!

Each day at 1pm EDT from March 23rd through March 26th two more face-offs will be posted.  The matches will be:

Come back to VenganzaMedia.com each day to vote for the winner! The victors advance to our March Marvel Madness Elite 8. Then, starting March 27, one match will be posted per day until only one Marvel champion remains!

Marvel collectors: get your dose of Marvel toy and statue collecting news on the Marvelicious Toys podcast!

Marvel movie fans: hear reviews of every Marvel movie, from Howard the Duck through Ant-Man on the Now Playing podcast!