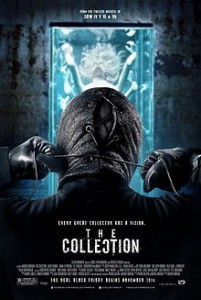 Elaborate, fatal traps? Squirm inducing injuries? Copious blood? Combine these features with a sadistic and mysterious killer and you’ve got The Collection, a sequel to The Collector.  The Collector was initially written as a prequel to Saw.    When it was rejected, it became its own movie outright, spawning this franchise.

Arkin, having escaped from The Collector, is tapped by a private security team to tell them where he was held captive so that they can rescue Elena, the latest victim.  He’s forced at gunpoint to enter the abandoned hotel that is the villain’s lair, in order to make sure that they get their target.  As the team is picked off by the deadly concealed ambushes, they are astounded by the grotesque acts The Collector has committed to his victims.

The Collector likes to kill his victims using fancy mouse (human?) traps.  Try to escape through a window and you’re likely to have your hand sliced off when you open it.  Step on a certain spot on the floor and large spears will impale you.  There’s a dotted line in the horror movie family tree from Jigsaw to The Collector.  They seem fairly similar in operations.  But The Collector lacks a motive.  The novelty of Jigsaw was that he offered his victims a chance at redemption.  Freeing oneself from the contraption was also freeing yourself from your past.  There is nothing hidden here, these exist solely to kill.  There is no redemption for any of the victims.  The contraptions are not elaborate as they were in the Saw series.  These try but they come off more as a deadly Home Alone movie.

The one thing this film does both very well is the character of The Collector.  He is incredibly menacing as we have never seen his face nor has he ever spoken. He lurks, stalks and grabs with the precision of Michael Myers.  He’s very mysterious with his lucha libre like mask and insect collection.  The potential for a great serial killer is there with all of this covertness, but he is too unknown.  There just aren’t enough character details to make him a great antagonist.  Other than he collects one person to keep from every killing spree, we don’t know anything else about him.  He’s portrayed as cryptic for cryptic sake but for no good reason.  It was unfulfilling to know so little.