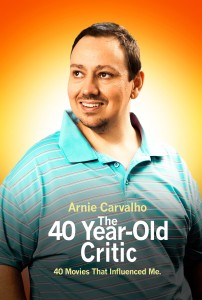 That milestone is not one without heft.  If the actuarial tables for American males are to be believed, I’m likely at least halfway through my time on this planet.  Each day I am probably closer to my death than to my birth.  Now is the time to start measuring life by the things I’ll never do instead of the things I could do.  It’s a time to reflect on what has been and determine what will be for the rest of my days.

The usual things come to mind when I ponder my life thus far:  My loving, supportive, smart, and funny wife, Marjorie.  My long-time best friend, Stuart.  My godparents, who helped raise me and taught me to be analytical.  My sister, who exposed me to literature and deconstructionist themes.  My father, who gave me a cynical view, a strange sense of humor, and a love of classical music.

But what all these people have in common is a strong memory of watching films together; sitting in a dimly lit cinema, absorbed by the images on the screen.

Marjorie and I have seen so many films together that I doubt I could compile a comprehensive list. but a few stand out.  Our first film as a married couple, watched in a midnight release on our honeymoon, was Star Wars:  Attack of the Clones.  The projector broke.  We sat for 3 hours past the planned midnight start time before the movie began.  I can still sing that New Orleans’ theater’s jingle for popcorn and candy, which played on a loop the entire time.

Another memorable movie trip was to see Richard Linklater’s Before Sunset. It was a limited release so we had to drive 4 hours each way just to watch the film, and I was so tired on the return trip we had to get a hotel.

I remember Ocean’s 11 — a movie with such a strong feel-good vibe that it saved our Sunday.  We walked into the theater in the most sour of moods, and left extremely happy.

I remember watching Fight Club on video.  Marjorie was tired so she went to sleep, and the next day all I could talk about was how she had to see that film–the first movie that I felt she and I had to share as a couple versus being able to experience on my own.

Stuart and I have seen films together since 1982.  I remember going with him to see E.T.: The Extra-Terrestrial and Return of the Jedi.  Many more movies followed, but there are standouts. Charlie Sheen’s The Wraith, which we saw hoping for horror but got car races and heavy metal instead.  We hated it at the time, but I later came to love this film for what it was (and the Sherilyn Fenn waterfall scene).  We saw The Gate the weekend it opened, and bemoaned our choice for days.  Not all the movies we watched were terrible — I first saw The Godfather trilogy in Stuart’s Chicago apartment, and he introduced me to Apocalypse Now and Blade Runner as part of a film noir marathon we had together as teens.

For years Stuart and I had a standing Christmas night movie appointment.  He was in town to spend the holiday with family, and so a dinner of Chinese food and a movie viewing was had. Jackie Brown was the most memorable of those Christmas viewings, and we had wildly different reactions to Quentin Tarantino’s Pulp Fiction follow-up.

But from European Vacation to Jaws 3-D to The Devil’s Rejects, Explorers, JFK, The Lawnmower Man and hundreds more, Stuart and I are still going to movies together.

My sister Susan took me to see my first R-rated film, Beverly Hills Cop.  She also exposed me to many movies I’d have not seen in my youth without her influence, including Ghostbusters and Lady and the Tramp.  She is much older than I, so our movie time together has been sparse, but always memorable, including E.T., Return of the Jedi, and Bridget Jones’ Diary.  (Though she staunchly refused to join me for a Hellraiser marathon.)

Yes, throughout the years my romantic, familial, and friend relationships have all involved, and in some ways been shaped by, movies.  Sometimes there is no quicker way to look into a person’s soul than to ask what films they cherish.  So it seems appropriate that to celebrate my 40th birthday I look back at 40 years of cinema.

Each day, from now until my birthday on September 12th, I will post an article looking back at the one film from each year of my life that impacted me most.  This may not be my favorite film, it may not even be a film I like, but the one that had the longest-lasting impact on me and helped shape my view of the world.

I hope you’ll join me each day as I reflect on my lifetime of cinema.