Soundtracks on Vinyl: The Hateful Eight

One of the draws to collect vinyl releases of movie scores and soundtracks is the large artwork for the film that accompanies it. These entries will review the vinyl record release of a film score/soundtrack from the music to the artwork, as well as the film…

The Hateful Eight is a western about a bounty hunter played by Kurt Russell en route to deliver a wanted fugitive played by Jennifer Jason Leigh to the law when they take refuge in a log cabin during a snowstorm in Wyoming. The two are joined by six other strangers looking for sanctuary from the blizzard. But as the night proceeds, it becomes clear that some of the strangers have secretly planted themselves there to free the female criminal. A tense standoff proceeds as identities are discovered and the body count rises.

A big deal was made over the Ultra Panavision 70 ultra-widescreen format director Quentin Tarantino used to film The Hateful Eight. No small part of that hype was due to Tarantino himself doing a very limited 70mm roadshow screening of the film with extra footage.  However, the film underperformed at $55-million (U.S. box office) after his previous two films, Django Unchained and Inglourious Basterds, brought in over $100-million each domestically.

Tarantino blamed Star Wars: The Force Awakens (released the week before the roadshow screenings) for eating up too many screens. I felt disappointed that I wouldn’t see the 70mm cut on a large IMAX screen because the theater was too busy projecting The Force Awakens on it 24/7. Some critics and movie-goers scratched their heads as to why Tarantino made such a big deal over the format when the majority of the film is set inside a small confined space.

Now Playing reviewed the film as part of its Fall 2015 donation series, so I’ll just sum up my feelings. I appreciated this film felt like Tarantino was stretching and trying to say more than some of his other movies. The film feels like it is commenting on a number of issues that were in the news at the time, such as the Confederate flag (heritage or hate) and racial tensions (police unions made vague threats against the director just before the film’s release for comments he made at a Black Lives Matter rally). Or maybe it’s just that much hasn’t changed in the United States since the end of the Civil War (the story is set a few years after) and we’re still struggling with our history as a nation. I rank it in the higher echelons of Tarantino’s filmography.

There was another notable part of the film’s production besides the widescreen lenses used. This was the first time Tarantino would use an original score instead of curating some of his favorite pop hits. It made sense to have Ennio Morricone score the western, as many of his fantastic scores have been used in that genre. He would even go one to win the Oscar for Best Score (which I’m perfectly happy with since the Academy somehow overlooked Junkie XL’s Mad Max: Fury Road score from a nomination…but that’s a whole other review).

One minor annoyance is that the sequencing of the tracks isn’t exactly in order of the film. I enjoy being able to listen to a score and replay the film in my mind. However, this album opens with “L’ultima Diligenza Di Red Rock (Versione Integrale)” instead of the overture. To be fair, the former is what the majority probably experienced as the opening music, as the overture was only included in the roadshow screening. But then why not just put it in order since the overture would have been unfamiliar no matter what to those who only saw the wide release?

The opening track is the main theme of the film and I can’t separate it from the opening shot of a long zoom-out of a frozen crucifix. It is so foreboding. It would be at home in a horror movie. Yet, Morricone gives it that western flair, including his trademark cowboy chants that can be heard throughout his Man with No Name trilogy score.

While the music rarely varies from this main theme, the instrumentation varies. At times the strings are heavier. Other times, it is the brass that carries the tune. “I Quattro Passeggeri” features the high hat being turned up considerably in the mix and the rhythm it is played with sets the piece apart from other reiterations of the theme. 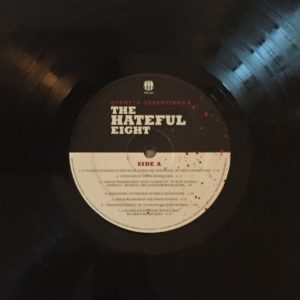 The real benefit of being able to listen to this score is each instrument really comes through without actors’ dialogue or sound effects obscuring them. There’s a lot going on in the compositions and it’s a great experience to sit back and be able to hear the entire orchestra working together to create each piece.

There are a few pop songs, as Tarantino is wont to do. Also included are parts of the dialogue. I wonder if the album would benefit from excising the dialogue. Many of the snippets contain racial epithets that, while working in the context of the film, seem out of place when removed from that context. However, it’s good to see the pop songs being included, as well as Jennifer Jason Leigh’s performance of “Jim Jones At Botany Bay” from the film.

Again, minor complaints about sequencing and dialogue excerpts aside (I could make a custom version of the album through mp3’s and a digital playlist versus being stuck with the analogue presentation, I suppose), this a great score. Maybe because Kurt Russell was staring, but with Morricone’s compositions, I almost expected some kind of monster like in The Thing to pop out. On the more bass-heavy end of the spectrum, this brooding composition with lots mood turns the typical western score into something tense and horrific. 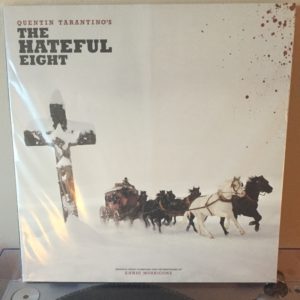 Guitarist Jack White’s label, Third Man Records, has produced the U.S. release of this double-LP soundtrack. It is packaged to capture the grandiose of Tarantino resurrecting the Ultra Panavision 70 format. It’s a heavy release…literally. I didn’t throw it on a scale to get an actual weight, but there is so much packed in, you feel it when lifting this from the record bin.

The sleeve is a tri-fold jacket. The front cover is from one my favorite shots in the film: a crucifix covered in snow as a stagecoach passes.  Splattering on the front cover and back with the title listing is blood printed using spot UV printing. This gives the droplets a gloss that makes them stand apart from the rest of the printing. The inside of the tri-fold is a group shot of the eight characters.

Two posters are included. First, is a 36”x12” shot of the stagecoach being pulled through the snow. It shows why Tarantino would have been drawn to the extra wide format. The other poster is even longer at 60”x12”. Yet, this one is a little disappointing. It is the same shot of the group as used for the inside of the jacket. However, instead of the stock photo being transposed against black, this show shows them in a snowy outdoor setting. It’s too bad a unique shot of the group wasn’t used. 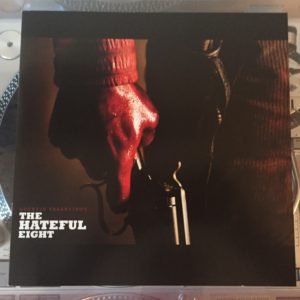 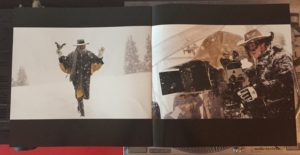 The final pack-in is a 12-page booklet. It’s mainly still from scenes in the film. I compared it with the booklet handed out during the roadshow screening of the film, and it contains mostly new photos. That was a pleasant surprise after seeing the same stock photo of the actors used twice for this released.

Overall, this is a release that lives up to the widescreen vision Tarantino had for his film. Great score packaged with a lot of extras for fans of the movie.