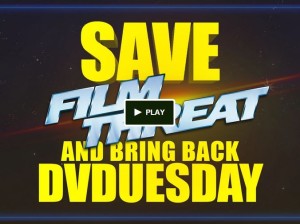 Back in the early 1990s, there was no better way to get the lowdown on the thriving world of independent cinema than Chris Gore’s funny, fearless zine.  Film Threat was instrumental in educating movie fans on future cult classics and breakout art movies that never played my small town multiplex.  While so-called entertainment rags People and Premiere focused exclusively on heartthrobs and overexposed Hollywood blockbusters, Gore’s subscribers were among the first to read about emerging festival talent like Quentin Tarantino, Richard Linklater, and Robert Rodriguez.

I lost track of Film Threat after graduating film school, and the publication migrated away from paper-and-ink circulation to a popular website.  Thanks to Now Playing’s own Kickstarter campaign, I’ve learned about an exciting new opportunity to see my beloved news source return.

Film Threat is over a week into a 30 day Kickstarter campaign designed to re-launch their brand.  Founder Chris Gore promises revenue will be used to build a new website that will house podcasts, a web series, and over 80,000 articles.  A phone app is also in the works.

Gore and his writers are great at crafting snarky and passionate film analysis – a formula I’ve sought to emulate whenever I record Now Playing episodes.  And I still dig up back issues of the mag whenever I research an obscure installment of a franchise – their in-depth cover story on Roger Corman’s FANTASTIC FOUR was essential in being able to put that disaster into a proper context.

I will be happy to help out my old friend Film Threat when payday comes around this week, and wish Gore and company much success in their plans to tackle the ever-expanding world of independent cinema.   All the details about the campaign can be found at this link.   https://www.kickstarter.com/projects/thatchrisgore/save-film-threat-and-bring-back-dvduesday