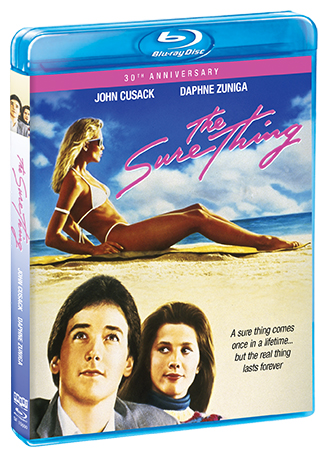 Let’s shift the year 2015 into gear and take a ride down the memory lane with Walter “Gib” Gibson and Alison Bradbury from the quintessential 80’s romantic comedy THE SURE THING, directed by celebrated filmmaker Rob Reiner and executive produced by Henry Winkler.  The film stars John Cusack (Say Anything…, High Fidelity), Daphne Zuniga (Spaceballs, One Tree Hill), Viveca Lindfors (Stargate) as Professor Taub and introducing Nicollette Sheridan (Spy Hard). On March 24, 2015, Shout! Factory will release THE SURE THING 30th Anniversary Edition Blu-ray™ on home entertainment shelves. Available for the first time on Blu-ray™, this special anniversary edition is a must have for movie collectors and fans of raucously funny road trips, red-hot romantic comedies and romps through 80’s angst. THE SURE THING 30th Anniversary Edition Blu-ray is priced to own at $24.97 SRP.

When college student Walter Gibson (Cusack) gets set up for a date with an incredibly gorgeous blonde (Nicollette Sheridan in her film debut), he’s ready to go to the ends of the earth — or at least across the country — to capitalize on this “sure thing.”  Paired up with tightly-wound coed Alison Bradbury (Zuniga) via the campus ride-share program, he heads west for Los Angeles. But as the obstacles begin to pile up, he and Alison begin to form an unexpected bond… and soon Gib must choose between the sure thing and the real thing.

• Road to The Sure Thing

• Casting The Sure Thing

• Reading The Sure Thing

• Dressing The Sure Thing