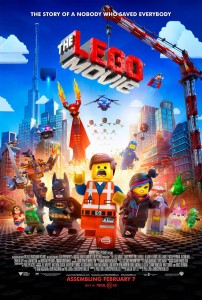 The rise of LEGO from brick-building toy to multimedia empire has been fascinating to watch.  For almost 50 years LEGO was a staple in every boy’s toy box, but that’s where it ended.  In the 1990s, though, LEGO started to branch out with video games, television specials, and more.  As an adult Star Wars and Marvel LEGO collector I’ve watched with great interest as the toy company produced several amusing TV episodes and the video games, though some of their productions clicked with me more than others (the recent Marvel Superheroes: Maximum Overload was a rare misstep).  Still, I always saw LEGO as leveraging their licensed titles for multimedia projects rather than creating their own characters and situations.

As such, I wondered what plot could propel The LEGO Movie.  LEGO has no characters, their sets exist to stimulate the imagination of the builder.  Despite having a strong voice cast, including Morgan Freeman, Will Ferrell, Elizabeth Banks, Will Arnett, Liam Neeson, and Guardians of the Galaxy‘s Chris Pratt, this is a movie I would likely have skipped were it not for the strong word of mouth.  On Twitter, Facebook, and elsewhere I read great praise for The LEGO Movie and so I decided to give it a chance.

Thirty minutes into the film I was regretting that choice.

As I’ve heard nothing but praise sung from the heavens since The LEGO Movie opened I do realize mine may be a minority opinion.  That said, I cannot get past the film’s rote storyline.  The movie follows Emmet Brickowski (Pratt), a LEGO minifigure who’s only remarkable quality is how average he is.  Early in the film the character’s desire to build friendships comes off desperate and pathetic.  The film quickly introduces other stock characters including the love interest, the bad guy, and the henchman,  and even an eight-year-old could see where this story was going.

But only a child who skipped his Ritilin would want to see it through.  The loud, garish editing of the film’s opening could appeal only to the most ADHD-addled minds.  Worse, the opening montage is a musical number set to the irritating Disney Radio-esque earworm “Everything is Awesome.”  One-third of the way into the film I strongly considered turning it off and forfeiting my $5 iTunes rental fee.  LEGO had finally created their own characters, but failed to create a single one I wanted to watch on screen.

Then Batman showed up.

I have seen Batman save thousands of lives in television and film, but no rescue is more impressive than the way The Dark Knight (voiced by Will Arnett) salvages The LEGO Movie.  Soon after Batman appears more LEGO licensed properties arrive,  from Star Wars to the LEGO NBA All-Stars to “Middle Zealand” (did Weta not want to share in the fun by letting LEGO use the name Middle Earth).  While the story of The LEGO Movie was beyond repair, the inclusion of these licensed LEGO characters brought to the film some of the winking, good-natured fun I had seen in the licensed LEGO games and TV specials.  Finally some of the jokes really started to hit (the one about Batman only using black or dark gray bricks was one of the laugh-out-loud moments in the film).

Anyone who has seen Toy Story could figure out where this movie was going, especially when real-world, non-LEGO items like Band-Aids, golf balls, and Krazy Glue start to appear.  Yet despite figuring out the world these LEGO builders had crafted, even I was shocked by the schmaltzy, live action ending the film had in store.

The true irony is that the film seems to be mocking commercialism while, at the same time, being a giant commercial.  The song “Everything is Awesome” epitomizes this theory–it’s mocked in the film for its banality, while the movie plays it endlessly and sells it as the title track on the movie soundtrack.  More, a LEGO movie exists to sell kids LEGO toys–there are LEGO Movie licensed building sets.  As such, the hypocrisy on display with the film’s demonization of commercial culture is astounding.

In the end, LEGO is a pretty average film. It has a strong “believe in yourself” message that I’m sure is great for those of single-digit ages, but unlike some of the Pixar or recent Disney animated films I felt LEGO lacked in broad appeal. Perhaps this is because I was never deep into LEGO (though I did own the red and blue spacemen in the 80s).  The only thing that saved this movie for me was the humor.  Superman’s loathing of Green Lantern was a high point (especially given how Warner Bros. has seemingly disavowed the Ryan Reynolds film) as was the mispronunciation of everyday items.

Because I did laugh out loud several times during this film I give it a RECOMMEND, but this film, like its main character, is nothing special.

As for that ending, I have a personal story to share

The most shocking thing about the film is that, in the end, it is a corporate statement against those who want to glue their LEGO sets together.  Unlike many toy companies who are happy to have customers buy and collect their toys for whatever reason, The LEGO Movie states clearly there is a right way and a wrong way to play with LEGO.

As stated earlier I am an adult LEGO collector.  I spent a week building a LEGO Star Wars AT-TE and had it on display for quite some time, though I’d sometimes return to find bricks had fallen off.  After moving to a new house I unpacked my AT-TE to find it as a pile of bricks not too unlike what had originally come in the box.

Frustrated by this, in 2009 while covering a toy event I asked a LEGO Master Builder which glue they recommended to keep LEGO sets whole.  The LEGO builder refused to recommend a glue and said the intent of LEGO is to build them again and again.  I pressed on the issue, though, pointing out the impressive display LEGO had.  I asked, honestly curious, if that was built on-site.  He admitted that the set was built and transported.  Though he wouldn’t admit the displays were glued, it was strongly implied.  Eventually he relented and told us that most forms of super-glue will keep the sets together.

But now I see that corporate anti-glue attitude on display in a full film.  I wonder if I was the only one audacious enough to ask a Master Builder how to glue my sets together or of the question may be common.  Now, rather than have to answer us one-by-one LEGO has answered as a company with this movie.