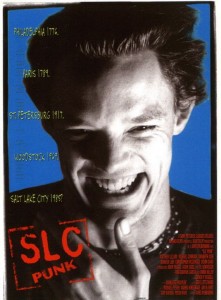 Dust of your steel toe boots and dye your mohawk blue, once a month I’ll be talking about a different punk movie here on the Gazette…

This month I move from the polluted streets of Los Angeles in Repo Man to the conservatively clean landscape of Salt Lake City in SLC Punk. The opening credits are framed as homage to classic punk album covers. It could be a foreboding omen that this film just isn’t for those who stick to Top 40 hits. Yet, instead of leaving the viewer alienated, the film is giddy with wanting to explain the punk aesthetic and show what it is so beloved by those who grasp to punk rock. While the film is overstuffed with exposition about the underground subculture, it twists its quirky adventures around a relatable plot about coming to terms with youthful ideology.

Blue-haired Stevo (Lillard) has graduated college despite his best intentions to only get a 4.0 GPA in damage. His father (McDonald) wants him to attend law school at Harvard, but Stevo is determined to waste his education by partying and living an anarchist lifestyle. However, as his friends begin to move away, go homeless, and die, Stevo wonders if his anarchist lifestyle is really the best choice.

The film is a course in Punk 101 that is humorous and entertaining. Stevo guides the uninitiated. He continually breaks the fourth wall while teaching about the idiosyncrasies of the punk lifestyle like a sociologist. He provides a slide show to explain the pecking order of rednecks, punks, mods, skinheads, and so on in the middle of a brawl. Even if one doesn’t understand the rivalry between the Sex Pistols and the Ramones when it comes to the origins of punk, Stevo explains it as he walks through a mall attacking those he deems poseurs. Lillard’s performance explodes with a contagious excitement that easily draws the viewer into the lifestyle.

The biggest missed opportunity with SLC Punk is, while providing plenty of cinematography of the city, it never convincingly declares much about Salt Lake City. The geography provides prime material to explore an anti-authoritarian culture clashing against a one with a heavy reverence for religious authority through the Mormons that settled the valley. While the characters make grandiose statements about the connection of Mormon occupation and oppression, there are no real demonstrations of the punks’ plight being caused by the religious makeup of the region. The only scene that feels specific to the geography is when Stevo and friends travel to Wyoming after explaining the strict liquor laws in Utah. Without that, this could have been passed off as Boise or Omaha Punk.

Many punks may not like Stevo’s final decision about where he stands with being marginalized by society. However, it is a crisis many who dawn mohawks wrestle with at some point. Can more be done on the outside of society or inside the system to produce change? SLC Punk provides a generalization of this struggle with manic energy grabs the viewer’s attention. While punks often want to keep their scene underground and hidden from the mainstream, SLC Punk delivers an accessible view without much compromise to the experience many punks share.