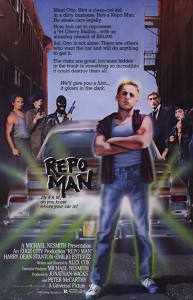 Dust of your steel toe boots and dye your mohawk blue, once a month I’ll be talking about a different punk movie here on the Gazette…

Repo Man stars Emilio Estevez as loser punk Otto a year before he’d played the jock picking on the losers in The Breakfast Club. Otto spends his days stocking the shelves at a grocery store until he quits after being continually scolded by his boss. However, Otto finds a new job more in line with his punk ethics—stealing cars from yuppies as a repo man. He learns the life of a repo man is always intense. The film maintains the intensity with a plot that grows ever stranger; changing lanes from scathing criticism on materialism to Cold War era fears to a B-movie alien flick.

Harry Dean Stanton plays repo man Bud, who recruits Otto to the profession. He teaches Otto the Repo Code. A repo man shall never damage an automobile he repossesses. Neither commie nor Christian shall ride in their car. The rich will always be the first to default on their loans. These men living on the outskirts of society are the perfect vehicle for the film’s contemptuous humor. They are more philosophers than struggling proletariat. The comedy is in their zen-like attitude as they snort cocaine to stay awake during the early morning hours and firing bullets to scare off deadbeat car owners.

Los Angeles is the ideal backdrop for the story. It’s a city built for driving, with vast stretches of cold pale concrete highways. However, this L.A. is in shambles with abandoned roads where the few roaming the streets are able to swerve from lane to lane. The fear of Cold War nuclear holocaust takes on a sense of normality as characters casually discuss the neutron bomb and the Manhattan Project in Los Alamos. If L.A. is yet to be annihilated by the bomb, the city is already conquered by a material emptiness where its residents are so weary of existence they are willing to consume jars of sustenance merely labeled as “food” and “drink.”

Meanwhile, a lobotomized scientist roams the streets of L.A. in a 1964 Chevy Malibu with the stolen bodies of four dead aliens in the trunk. A shadowy government agency puts a $20,000 bounty on the car; resulting in a clash between rival repo men and UFO enthusiasts. Miller (Walter), a repo man who refuses to drive a car, theorizes these aliens had been transporting people back in time to populate the once empty earth. Steven Spielberg had introduced an alien savior that could heal with his touch in E.T. Writer and director Alex Cox further mashes aliens and the Bible with a sci-fi creation story, though with a farcical edge. Cox’s take is a throwback to the B-movies of the 50s, hinting that modern society is more a product of the entertainment industry than traditional religion.

Repo Man is like a fast-paced riff from one of the soundtrack’s many hardcore punk songs. The social commentary must uphold a blistering intensity. As ideas on modern materialism, Los Angeles’s identity, marginalized subcultures, and science fiction B-movies all slam together, there is the threat that at any moment the film can lose its energy and fray into a giant wall of sloppy, distorted noise. Surprisingly, it doesn’t. The film maintains a steady beat of sharp-tongued criticism and brash humor until the end; making it a constant on the set list of must-see cinema.

Repo Man will be released on DVD and Blu-ray with a new high-definition restored transfer on April 16, 2013.