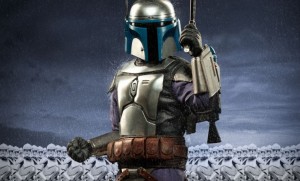 It has been some time since Sideshow Collectibles put up for order a new Star Wars 12-inch scale figure.  They previewed an upcoming sixth-scale Artoo Detoo, but then today they put up for pre-order a totally different figure:  Jango Fett!

This villain from Attack of the Clones is loaded with accessories and detail.  With a fully articulated body and a detailed flight suit including the “durasteel” Armored Vest, Thigh, Knee, Shin, and Boot armor, he also has a belt with pouches, a dual holster belt, left and right gaultnets, boots, a poncho, two Jetpacks, and more!  Plus he comes with two Blaster Pistols and a Kamino Saber Dart!  Also, the blasters and jet packs have flare attachments for a more action-oriented display.

And if you order the Sideshow Exclusive Edition today you get a swap-out head, showing Jango Fett unmasked, wearing his pilot’s head gear!

This figure is available for pre-order now for $219.99, and payment plans available as low as $73.33 per month, so head to Sideshow Collectibles and get yours now!