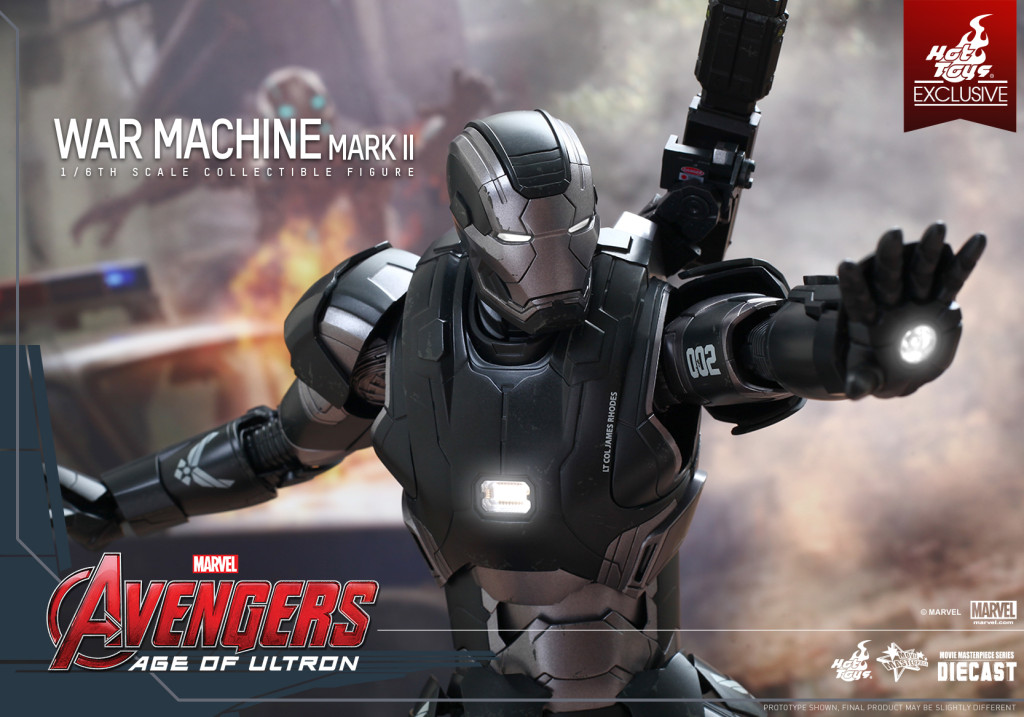 For Iron Man 3 a number of collectibles were made showing Iron Man’s pal War Machine in his more metallic suit, but in editing only the Iron Patriot was shown.  Even Hot Toys released that version of the War Machine armor.

Do you think Don Cheadle looked at the gray War Machine armor made for Iron Man 3 and said, “Next time, baby!”?  Well, that time is now!

Now, for Avengers: Age of Ultron the War Machine is back and he’s in his classic colors!  But…there are some subtle differences between the suit designed for Iron Man 3 and the one shown on screen in Age of Ultron.  So while you may have a Hot Toys figure really close to this one–unless you pre-order this new figure from Hot Toys you don’t have the Age of Ultron armor!

And to add to the mix, this figure is only being offered through a partnership between Hot Toys and Sideshow Collectibles as a Sideshow exclusive figure!  (It’s about time we got one stateside after having to hunt for so many overseas variants).  If it’s anything like the last exclusive armored Avenger offered by Sideshow, the Stealth Armor Iron Man, it is bound to sell out fast too!

Plus this is part of Hot Toys’  MMS Diecast Series which the collectible figures are made of diecast material, and realistically designed to look even more like the armor as it appears in the film.  You heard our glowing review of Iron Patriot on Marvelicious Toys, now it’s time for War Machine to get that same love.

Gear yourself up for this super exciting film and expand your Avengers: Age of Ultron collection with this diecast collectible figure as “War Machine rocks”.

– Over 30 points of articulations

Weapon:
– One (1) rotatable machine gun at the back

Check out our pics and get over to Sideshow and order yours now!