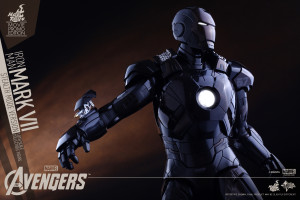 Years ago at San Diego Comic-Con Hot Toys showed the Iron Man — Stealth Armor.  Years passed with no word on if this armor was continued or cancelled.  Hot Toys delved into their House Party Protocol of armors but still no word on the more comic-based blue and black Stealth armor.  Until now.  Now it’s a MOVIE PROMO EDITION collectible figure, only be available exclusively in selected markets during upcoming promotion events period in different countries… but you can order it now at Sideshow Collectibles!

This stylish stealth mode version Mark VII collectible figure will be a great addition to your Iron Man collection!

The Avengers Movie Promo Series Iron Man sold out in ONE NIGHT, so don’t wait–don’t let the weekend pass without getting your order in today!  (And if it’s waitlisted, get on that waitslist–the sooner you sign up the better your chances!)