The first Avengers film made more than a billion dollars at the box office, and toy makers are primed to build on that success with Avengers: Age of Ultron!  Look at some of the toys and collectibles available for pre-order now at Entertainment Earth:

From Marvel Studios…
“When Tony Stark tries to jumpstart a dormant peacekeeping program, things go awry and Earth’s Mightiest Heroes, including Iron Man, Captain America, Thor, The Incredible Hulk, Black Widow and Hawkeye, are put to the ultimate test as the fate of the planet hangs in the balance. As the villainous Ultron emerges, it is up to The Avengers to stop him from enacting his terrible plans, and soon uneasy alliances and unexpected action pave the way for an epic and unique global adventure.”

In theaters May 1st!
Check out the latest trailer right here! 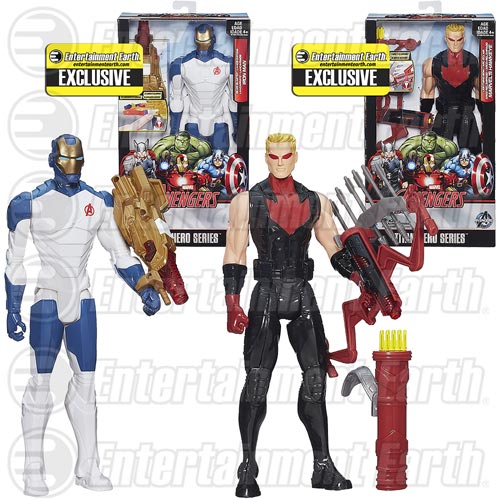 Super-size your Marvel superhero adventures with the electrifying Avengers Titan Heroes Iron Man and Hawkeye Deluxe Electronic Action Figure Set – an Entertainment Earth Exclusive! Each figure is inspired by Marvel’s ongoing Avengers story, pitting the world’s greatest assembly of superheroes against tougher threats than ever before. Each Avenger is ready to unleash the light of justice on the darker corners of the Marvel universe. These gargantuan plastic action figures are jointed and stand 12-inches tall. Ages 4 and up.

Truly a superior Iron Man, Tony Stark is back in a new blue and white suit of armor! The cool exec with a heart of steel upgrades his wardrobe so he looks snazzy in Silicon Valley or anywhere Stark Enterprises expands! Tony’s look is modeled after his classic wardrobe, with a hint of the flavor appearing in Marvel Now! Superior Iron Man‘s pages. This 12-inch figure comes with a spectacular light-up blaster you’ll only find at Entertainment Earth.

Clint Barton went out and found himself some thick red frames, with glass so dark they won’t even know his name – but you will! Hawkeye’s new outfit is inspired by the massively multiplayer online game Marvel Heroes 2015 and the hit TV seriesAvengers Assemble, combining to bring you one of the best archers in the business! Loki, Doctor Doom, Ultron, and bad guys won’t stand a chance against his funky fine bow with a special kind of light.

“I know you’re good people. I know you mean well. But you just didn’t think it through.” Think it through and collect the Avengers 2 Age of Ultron Mystery Minis Vinyl Mini-Figures! This Avengers Age of Ultron Mystery Minis Vinyl Mini-Figure Display Box contains 12 mini-figures, with each standing 2 1/2-inches tall. Including fan favorites such as Iron Man, Hulkbuster, and Nick Fury, these stylized figures are perfect for Marvel and Avengers fans!

Item selection is random. Items are in blind packaging.

The Avengers just got a little more adorable! Figural plushes that can stand up, the Avengers Age of Ultron Fabrikations Plushes measure over 6-inches tall. Their heads even rotate!  Pre-Order Now

Thor, Hulk, Iron Man, and Captain America are coming to your living room as mini bobble heads! Each Avenger stands approximately 3-inches tall and all 4 characters are packaged in a displayable window box. The Avengers Age of Ultron Mini Wacky Wobbler 4-Pack is a great gift idea for any Marvel or Avengers 2: Age of Ultron fan!  Pre-order now!