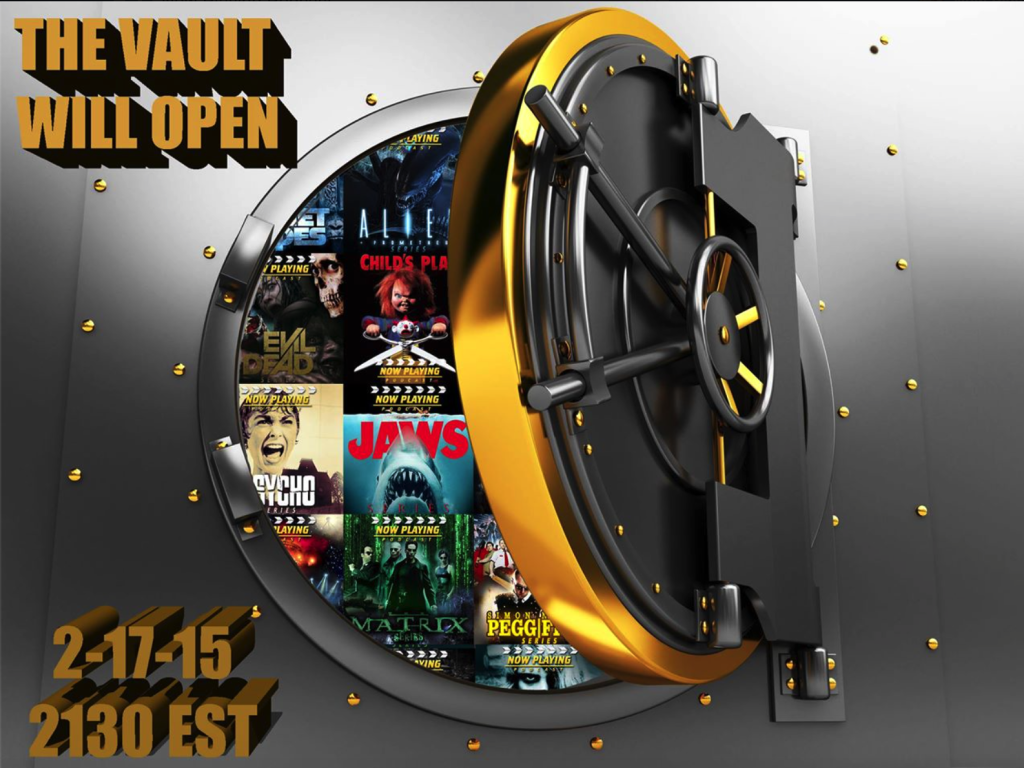 One listener will win the entire donation library, but they must be present for the live show and follow-up Q&A, starting at 9:30 p.m. EST.

Inside the vault — which I imagine is welded shut and bound in human flesh like the Necronomicon Ex-Mortis – are the precious few retrospective series’ that Now Playing Podcast offers listeners during its bi-annual pledge drives.

The Alien series, Child’s Play, Jaws, Evil Dead, Exorcist, Poltergeist – that’s not even half of what you’ll find inside. But the hosts promise all will be up for grabs.

Now Playing Podcast launched its first pledge drive in 2010 with reviews of the five Child’s Play movies (with a sixth film added to the series in 2013). Host Arnie Carvalho has credited listener support for keeping Now Playing on the air, and in return the hosts have continued to up the number of shows offered per donation drive (a total of 13 were available in Fall 2014) while sprinkling in secret shows like Garbage Pail Kids and Troll.

It’s been more than two years since Now Playing Podcast gave listeners a chance to loot the vault.

So why now? And what’s the catch?

“We’re not opening them for new donations,” Carvalho said. “What that means… what we are doing… we’ll reveal during our live show.”

Although just one fan will win it all, the host added that it won’t be the only opportunity to grab the long-sought donation shows.

“Hopefully 2015 will be Now Playing’s biggest year yet,” he added. “And giving listeners a chance to get these old podcasts is just the beginning.”