To mark the 10th anniversary of Now Playing Podcast in 2017, hosts and staff are looking back at defining moments throughout the show’s history.

This week a Now Playing Podcast listener generously pointed out that Jan. 9, 2017 marked the eighth anniversary of the show’s first retrospective series, Friday the 13th. While eight years – the bronze and pottery anniversary – doesn’t get the attention of 10 or 15 years, there are a couple of reasons Now Playing listeners will want to look back on the occasion. 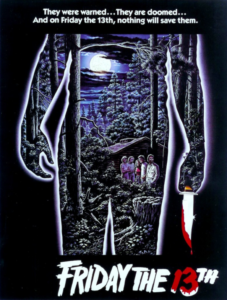 The original “Friday the 13th” poster.

Today’s listeners take for granted Now Playing’s weekly releases, the hosts’ heavy research, detailed plot summaries, and professional production value. But before that first retrospective in 2009, the show was still finding its footing. Episodes were released once or twice a month, with revolving pairs of hosts, and, most notably, very brief runtimes. Most shows averaged about 20 minutes, a far cry from the 90-120 minute format it’s known for today.

Those Friday the 13th reviews started Now Playing on the path, but at the time it was just an experiment. With a reboot of the series on the way, the idea was to go back and review all previous entries (unusual for a show that largely focused on week-of releases and had “Now Playing” in the title), take a new approach to the editing process, and add a third host.

Brock: “Friday the 13th was my first introduction to Stuart. I remember Arnie telling me he had a friend in mind for the third host – the one who did the Clone Wars cartoon movie review – but [Arnie] wasn’t sure if Stuart would want to do it.”

Arnie: “Stuart had also done the review of Midnight Meat Train with me and that long-time friendship led to great chemistry on the mic.”

Stuart: “I remember feeling uncertain about the necessity of a retrospective, or what I could contribute. I was very reserved, and was actually playing chess on my computer until my mouse clicking busted me. [I thought], ‘You mean I can’t do that?’”

Brock: “Those first few shows were not only an experiment in format, but also in our chemistry.”

Arnie: “We were getting a feel for what we were doing. My notes were scattered, Brock didn’t want to share points ahead of time, and Stuart sent long, written reviews of each film before recording.”

Here is an excerpt from Stuart’s write-up of Friday the 13th: The Final Chapter:

I’m now convinced there never was much merit to this series, and the only reason it was so profitable was because it was created the ideal date scenario for teens in the 80s.  Kids snuck off to watch a forbidden R-rated movie where they would be stimulated by nudity, sex, and violence.  And like a gateway drug, watching would lead to doing and I wish we had statistics on how many station wagon back seats saw action post-screening.  And since they came out in such quick succession, and movies didn’t get rushed to videotape in less than a year, you could practically guarantee that you could attend a FRIDAY film and get laid at a theatre or drive-in near you whenever you could land a date.  Who would have guessed Jason had so much in common with Dr. Ruth?  And why do I keep having to review soft porn like it’s worthy of intellectual discourse?

Brock: “I remember editing some of the Friday the 13th shows and how (by today’s standards) rudimentary our tracks were that it made for some, let’s call them ‘challenges’ in the editing process.

Arnie: “It was intended that each movie recording would be only 10 minutes. When I started sending notes Brock was afraid the shows would be too long.”

Brock: “Once the download numbers started coming in and the response we were getting exceeded all expectations Arnie and I were just blown away. We knew we hit in something. “

Arnie: “Before the Friday the 13th series we would get between 50 and 500 hits per show. With Friday the 13th we started at 5,000 and went up from there. I remember being ecstatic at getting 40,000 downloads in one month!”

Brock: “And then I advocated we do Star Trek as a follow up. That was a tight window but we made it and well, look where Now Playing is now.”

The eighth anniversary of Now Playing’s Friday the 13th retrospective is also a reminder that it’s been eight, EIGHT years since we last saw Jason Voorhees on screen. Proposals for a sequel, reboot, and television series have been discussed for years, but the most significant (and it is significant) development for the property has been Gun Media’s Kickstarter-funded Friday the 13th video game, which is expected to be released later this year.

As for the next theatrical film, that’s anybody’s guess. The Now Playing hosts will be there, but they’re not holding their collective breaths for any of the rumored release dates.

Stuart: “That Platinum Dunes reboot was not something to build on (ditto Freddy) so it doesn’t surprise me that they’ve been unable to come up with a proper sequel.  That said, I thought for sure we’d have another TV series. A CW show with kids at a lake house that worry about pimples, peer pressure, and getting impaled by a guy in a hockey mask.”

Brock: “Studios keep coming back to Leatherface and his chainsaw, so it is only a matter of time before Jason dons the hockey mask once again.”

Arnie: “Paramount does have that new film about to go into production (theoretically). Is it coming out this year? It’s supposed to shoot this Spring for release…October? Next February? With so many false starts (the found footage idea being the worst) I’m not making any plans just yet. I’m ready to go camping whenever Jason returns to Crystal Lake, and hey, this Friday is Friday the 13th!”