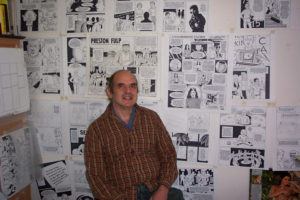 This week Now Playing Podcast continues reviewing films based on DC Comics with American Splendor*, the biopic about the life of Harvey Pekar. Arnie, Stuart, and Jakob will be reviewing and analyzing this Academy Award winning film.

But before Jakob was an author and podcaster on Now Playing Podcast, he was host of Comicpocalypse — a Venganza Media podcast covering all areas of comic books.  On that show Jakob performed several interviews with comic creators. In 2008, the Comicpocalypse guest was Pekar in a two-part interview.

While Comicpocalypse ended later in 2008 and its shows are no longer online, we are proud to make available this two-part interview as an introduction to Now Playing’s movie review.