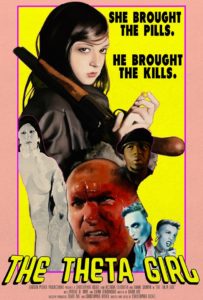 The Theta Girl is a psychedelic horror/thriller made for $14,000 by first-time filmmakers. Director Chris Bickel stated his main goal was just to finish the project no matter what the final product was. That could have resulted in something like one of the many direct-to-video sequels from the Children of the Corn or Hellraiser franchises we’ve reviewed on Now Playing (or even worse if you’ve experienced the movies of Neil Breen). However, The Theta Girl‘s end product is a must watch for anyone into grindhouse cinema and surreal storytelling.

Gayce is the theta girl who believes she can bring about a better world through the drug theta. Theta users share a hallucinogenic experience where they interact with The Entity, an androgynous, birdlike humanoid. But when Gayce’s friends are brutally murdered for using the drug, she sets out to find the killer and get her revenge.

Among all the blood, gore, and surreal imagery, this micro-budget film strains most, not with its splatter, but with the more standard aspects of film making. The dialogue sounds more distant than it should at times. There were a few edits that confused the storytelling. And the actors are amateurs. Yet, this being an exploitation film, none of these shortcomings feel outside the norm for anything in that genre from the ’70s or ’80s. Because of the element of drug use, maybe those confusing edits are there to help the viewer experience what theta users experience. And while this is probably the first film most of the actors are starring in, many of them have a striking presence that makes up for their still-maturing acting abilities. These flaws are minor and knowing this was made for a fraction of even a low budget film, I’m excited to see what Bickel can do next with the experienced he gained here (his follow up is currently in production).

Fans of exploitation films will find plenty to enjoy, and not just because of its liberal display of ripped-out intestines or frequent male and female nudity.  Bickel has created an exploitation movie that isn’t a nostalgic throwback the way many of the recent films inspired by Quentin Tarantino and Robert Rodriquez’s Grindhouse are. While the color grading is oversaturated giving the film the look of a low budget ’80s horror film, there isn’t the faux scratched film effects that has become a cliché. Rather, The Theta Girl is made by people who love grindhouse cinema but want to put their own spin on them.

The best visuals come in the shared visions of theta users. I wish more time was spent in this realm with The Entity. Behind this mysterious being is a stage production-like, rotating set of landscapes that turns like giant cogs. The influence of David Lynch’s surreal imagery looms as much as the influence of any violent ’70s revenge story.

The most intriguing spin on the genre is from first time writer David Axe’s script. The story isn’t just about transgressive imagery and acts. Rather it examines the human drive to find god in just about any kind of activity whether it is organized religion or drug use. The film has been billed as “existenploitation” and that’s appropriate as Gayce’s revenge journey also leads her to an existential crisis as she realizes her attempts to bring about a new world leads to the same problems as when religion tries to establish a utopia. 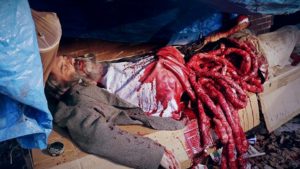 The Theta Girl offers everything one wants with a midnight movie: violent murder, gratuitous sex, drug abuse, and punk rock. It successfully tells a story that digs deeper than the usual visceral delights of the exploitation genre. An ambitious script with ambitious filmmakers have created a microbudget film that feels larger than its monetary constraints and make The Theta Girl a RECOMMEND.

The Theta Girl is available in the following formats: