Movie Review: The Place Beyond The Pines 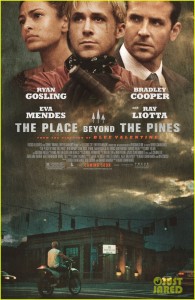 The Place Beyond The Pines

The Place Beyond The Pines is a multigenerational saga like the Godfather. Characters will die. Others will rise to power. Some will fall from grace. However, unlike the Godfather saga, these characters are working class. Ordinary cops and bank robbers replace the glamorized mafia and FBI stings. Despite the lack of gangster fantasies, the film provides grounded, well developed characters that make for an emotional drama.

Luke (Gosling) quits his job as a stunt motorcyclist for a traveling carnival when he discovers he has a son in one of the towns his work brings him to annually. He turns to robbing banks when he is unable to find steady work to support his child. As he is pursued by police, a brief encounter with rookie cop Avery (Cooper) will change the course of Luke’s, Avery’s, and both of their sons’ lives.

Luke may seem threatening with his body covered in crude tattoos and his love for high speed motorcycling but Gosling is convincing that his character is kinder than he appears. There is a touching moment when Luke tells the mother of his child, Romina (Mendes), that he wants to be the first to feed their son ice cream to lessen the pain of being an absent father. The hurt and despair Luke feels for not being able to provide for his son is heartbreaking and lets the viewer sympathize with the character. When Luke turns violent and resorts to robbing banks to give his son a future, the tendency is to mourn rather than to harshly condemn his decision.

The film becomes a tense police drama as Avery’s path crosses with Luke in a high speed chase after Luke robs a bank. Cooper convinces us that Avery may have the book smarts to enforce justice, but not the street smarts to stay clean of corruption. The sleazy police workings are felt immediately as Liotta, playing corrupt cop Deluca, is introduced. His reassuring words and smile only heighten his threatening presence.

The movie loses some focus as it turns to examine the sons of Avery and Luke. Their fathers are more interesting, complex characters. These sons are forced into a rote tale of peer pressure. Two-thirds of the film I was engaged in examining characters that were well rounded and storytelling filled with emotion and tension. The third act is underwhelming as tough questions stop being asked and the film becomes an after school special.

Like the Godfather trilogy, The Place Beyond The Pines is hampered by a weak final third. The first two acts are filled with sorrow and tension that grip the viewer. The story may be multigenerational, but the children are never allowed to mature like the adult characters that held the viewer’s attention for most of the running time; making this film a mild recommend.