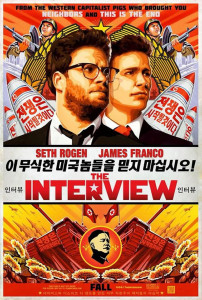 That movie is, of course, The Interview, and its controversial plot involving the assassination of North Korean dictator Kim Jong-un.

The lore around this film’s release is great, and yet muddied.  It is supposedly the motive behind one of the largest cyberattacks in history–a massive breach of Sony Pictures’ network.  This hack has led to private e-mails being leaked and several films hitting bittorrent weeks before theaters.  Debate raged on if the media should cover the contents of these leaked files.

The FBI has claimed North Korea is the group behind the hacks, yet there is compelling evidence that others may in fact be responsible, and The Interview‘s North Korea plot simply a red herring.

Then the hackers threatened physical attacks if The Interview was released and theater chains like AMC to refused to show the film.  With few movie houses still willing to screen the film Sony cancelled the release, and suddenly this movie became about more than just dick jokes–it was about freedom of speech!  Indignant tweets were issued, and even President Obama weighed in calling Sony’s move a “mistake.”

Thus it has been hailed as a triumph of creativity that Sony reversed its decision.  On Christmas Day The Interview will be shown at independent theaters nationwide.  More, starting December 24, The Interview was available for purchase or rent from Google Play or YouTube (though the Google-only release made this film only slightly less difficult for me to watch, having only an Apple TV and a TiVo hooked up to my home theater; this guide helped greatly).

But now that the film is out, available to rent in your home, a far more fundamental question must be asked–will everyone who has decried the film’s cancellation watch it?

Of course taken in the context of the national conversation there is no way a lighthearted comedy like The Interview could hold up.  As an apotheosis for freedom of expression The Interview is lacking, and that should come as no surprise to anyone familiar with the oeuvres of the film’s stars James Franco and Seth Rogen.

So tonight I watched this movie and stripped away all thought of the brouhaha surrounding its release to review the film on its own merits.

The story surrounds  TV talk-show host Dave Skylark (James Franco) and his producer Aaron Rapaport (Seth Rogen).  When it’s uncovered that their show Skylark Tonight is a favorite of Kim Jong-un’s the duo schedule an interview with the reclusive leader.  Yet the simple fluff piece becomes deadly serious when Skylark and rapaport are approached by CIA Agent Lacey (Lizzy Caplan) drafting the two to assassinate the dictator.

Despite its pseudo-political plot, The Interview is not revolutionary.  This is the second film co-directed by Rogen and his longtime collaborator Evan Goldberg, and it follows very much in the style and one of their first feature This is the End.  Both films are about single guys in above their heads, and so as expected, The Interview movie has more dick jokes than political statements–it’s a film that plays to the stars’ fan base without expanding their appeal.

It’s telling that the movie is strongest in its first act when it is firmly planted in the United States, Franco having “revealing” interviews with Eminem and Rob Lowe.  Lampooning celebrity culture was the backbone of This is the End, and is obviously an area where Rogen and Goldberg feel comfortable.

Additionally the chemistry between the two leads is infectious.  Rogen and Franco have worked together for over a decade since the Judd Apatow series Freaks and Geeks (a series in which Caplan also had a recurring role) and they play off each other very well.  It’s fun to watch them on screen together discussing “stink dick” and  I would have watched an entire comedy revolving around the antics on Skylark Tonight.

But once the duo arrive in North Korea the movie starts to lose its footing.  The bromance between the two leads hits the rocks when Skylark begins to go rogue and bond with Kim, played by Randall Park.  Park is the true weak link in the film; his performance never carries any gravitas, thus undermining the importance of his role as a rogue dictator with an arsenal of nuclear weapons.  More, Franco and Park never show a hint of the chemistry we saw with Franco and Rogen, and the scenes between the TV personality and the dictator drag.

The longer the movie runs the less funny it became, and at a nearly 2-hour runtime The Interview came very close to overstaying its welcome.  The last twenty minutes are painfully unfunny save for some extreme violence.  The film did have a good number of laughs, they just were all packed into the first hour.

So no, there is nothing in this film to rally around.  I suspect that once audiences can actually see the movie they’ll quickly forget the circumstances surrounding its release.  But for fans of the Apatow level of stoner and sex humor, there’s enough here that I give The Interview a mild recommend.

It’s a major victory for freedom of speech, but a very, very minor one for the cast and crew who made The Interview.