Movie Review: Better Luck Tomorrow — Is This the Prequel to The Fast and the Furious: Tokyo Drift? 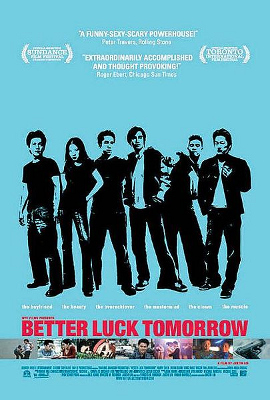 The high school drama feels honest, with Ben taken with lab partner Stephanie, unsure of his place in the high school hierarchy, and very focused on college and his future. In fact, for the first act of this film I thought that’s all the movie would be–an Asian-American coming of age drama like The Breakfast Club or Almost Famous. When the film takes its second act turn and becomes a crime film it was unexpected, but never felt disingenuous.

I kept trying to anticipate how the film would progress, and I never got it right. Lin’s picture (which he co-wrote) keeps taking unexpected turns, and I was along for the ride.

The cast is uniformly awesome. Shen, likely best known now for his three turns in the Hatchet series, carries the film. Told from his point of view, he’s in every scene. His daily routines reminded me of an Aaronofsky character, but showed his focus on his goals. When the character makes unexpected choices, it’s Shen who makes sense of it.

Jason Tobin plays Virgil. Seemingly the least intelligent and most impulsive member of the gang, Tobin brings a madness and pathos to the role that really added suspense. It really seems Virgil will be the group’s undoing.

Roger Fan’s Derec, the leader of the gang, is charismatic and scheming, but also seems like a good guy. The wrong balance with Derec could turn you against the gang, but Fan plays the balance and even at times seems vulnerable.

And Sung Kang plays Han–the reason I watched this film. Kang would go on to play Han in 3 of Lin’s FAST AND FURIOUS films, and Lin has said it’s the same Han seen in this film. Here Han is not given the focus much, but he is the coolest member of the gang with a pretty nice car. He’d fade into the background were it not for his future collaborations with Lin.

The film avoids any stereotypes–these are just high schoolers who happen to be Asian, but they’re all-American kids balancing a bright future with a life of crime and instant gratification.

When the film ended I found myself satisfied. It was a drama film that had elements of crime, not a crime film with elements of drama, but an entertaining and moving watch. RECOMMEND.