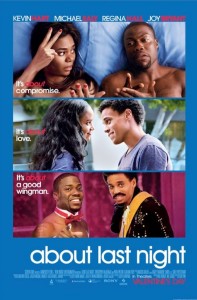 The 1986 Brat Pack romance About Last Night is one of my favorite films.  That movie was adapted from the 1970s David Mamet play “Sexual Perversity in Chicago” and starred Rob Lowe and Demi Moore as Danny and Debbie — two young adults trying to make a relationship out of a one night stand.  Strong comedic turns from James Belushi and Elizabeth Perkins as Bernie and Joan, the lovers’ best friends, added a great deal of enjoyable humor to the film.

I have watched that 80s film so often that when I saw a trailer recycling its one-liners I was appalled…until I realized that film was a remake.  Knowing the original film was dated I was actually happy with the idea of a remake, bringing that movie’s charm to a new generation of young adults.  Last year around Valentine’s Day couples again had a chance to talk About Last Night.

I was surprised, however, at how closely this 2014 version hews to the original.  The plot is beat-for-beat the same, with many scenes being re-enacted with near-identical dialogue.  Some of the slang terms were updated to make the lines feel more modern, but this is the same movie as was done almost 20 years ago.

The biggest difference here is the cast.  Perhaps attempting to appeal to a new demographic all four main characters are now African-American.  Surprisingly, all that really changed was the characters’ skin color–the names, actions, and attitudes all mirror those of the white actors in the 80s version.  They even work in the same jobs as their earlier counterparts.  That this cast happens to be African-American is entirely incidental in this film as directed by Steve Pink (Accepted, Hot Tub Time Machine parts 1 and 2).

The characters aren’t living in Chicago any more, but this movie is a clone of the original.

That said, much like Gus Van Sant’s remake of Psycho, you can take the same script and not achieve the same results.  As Danny and Debbie, the main couple, Michael Ealy (Think Like a Man and “Slap Jack” in 2 Fast 2 Furious) and Joy Bryant (TV’s Parenthood) simply lack chemistry.  I truly believed every scene between Lowe and Moore in the original, with their complex emotions and conflicting desires.  Yet in this remake Ealy and Bryant seem to be going through the motions.  Each deliver their lines with feeling, but yet I don’t feel the raw heat that worked so well in the first film.

To make up for this the previously supporting characters of Bernie and Joan have been beefed up.  Kevin Hart (Ride Along, The Wedding Ringer) is even given top billing in the credits, though his role of Bernie is only slightly larger than Belushi’s original.  Still, Hart is a capable comedian and his Bernie is even better than Belushi’s original.  Hart may recycle many of the original film’s jokes but his delivery and timing simply make them funnier.

To continue expanding Bernie’s character a new subplot was added focusing on Bernie’s relationship with Joan (Scary Movie‘s Regina Hall).  Belushi and Perkins had sexual tension in the original, but here it’s a full-on relationship that is more fun to watch than the movie’s A-plot.

As I just don’t care about this movie’s Danny and Debbie the remake will never supplant the original for me, but thanks to Hart and Hall I give this film a recommend