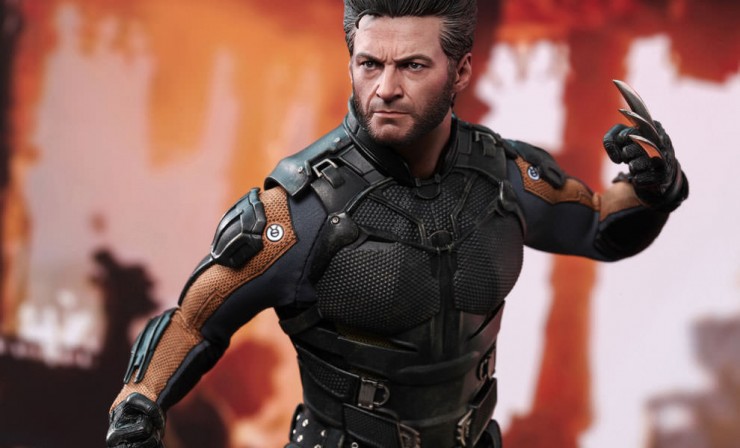 Fans of movies based on Marvel Comics characters have several pre-orders hitting today!

First, from the film X-Men: Days of Future Past Hot Toys and Sideshow Collectibles bring Wolverine!  This figure has over 30 points of articulation, 3 pairs of swappable hands (with and without claws!), and an outfit representing Hugh Jackman as Wolverine in the dystopian future shown at the film’s opening.  It stands just under 12-inches tall, and comes with a specialized Wolverine display base.

Now, it’s no secret that licensees have issues making toys and collectibles based on 20th Century Fox’s X-Men and Fantastic Four films.  The last X-Men film to receive a big marketing push was X-Men Origins: Wolverine back in 2009.  In 2011, covering New York Toy Fair for Marvelicious Toys, I interviewed one of the Marvel reps at Hasbro’s presentation.  I was shocked at a lack of toys for that summer’s X-Men: First Class and I asked about that.  I was told that Marvel would be marketing their X-Men: First Class comic books, not the movies.  Indeed, in the past five years it has been hard to find any toys or statues based on the X-Men movies; only the comics.  Only Diamond Select, with their Minimates lines, has covered all the Marvel movies regardless of studio.

In 2012 Hot Toys announced a licensing agreement for figures based on X-Men: First Class and Magneto and Charles Xavier figures were shown at various Hot Toys exhibits, but they never were released.  It is more than likely pressure from Marvel has caused those figures to be indefinitely delayed, if not altogether cancelled.

Yet Hot Toys has persevered in releasing X-Men movie toys…if only Wolverine figures.  Their first was from X-Men Origins: Wolverine released in 2009.  That figure shot up in value and even had some high-quality bootlegs sold on eBay.  As such, in 2012 Hot Toys made another Wolverine figure from X-Men III: The Last Stand.  Then last year Hot Toys made another version of this character, showing his appearance in The Wolverine (still available to order, at a deep discount, from Sideshow Collectibles).  This Days of Future Past Wolverine is the 4th version of this character.

Despite how much I really want Hot Toys to finally release the other X-Men figures (specifically the yellow-and-blue clad X-Men from First Class) Wolverine is the most popular X-Man.  Each version of this figure has been distinct, and showing a likeness of Hugh Jackman appropriate to that film.  This is an older Jackman likeness, and the future outfit is far different from any we’ve gotten before.

At $250 the figure is a bit more expensive than I’d like–with no large diorama pieces, excessive accessories, or swappable heads I’d prefer to see this around $200 like The Wolverine version,  but it’s still a great version of the character.

I have it ordered already, both for the figure it is, plus I’m hoping that by “voting with my dollars” Hot Toys and Marvel realize high-end figures based on the X-Men films are profitable enough to continue beyond Wolverine.

(as an aside, X-Men: Days of Future Past came out on DVD and Blu-Ray this week, and the collector’s edition is almost half off at Amazon!)

If you prefer Marvel Studios’ own films, such as Guardians of the Galaxy, a new collectible is available for you as well!  From Funko comes the Entertainment Earth exclusive Hikari Premium Sofubi Vinyl Figure of Groot! 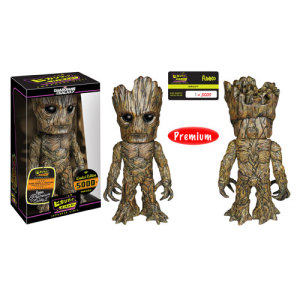 While that’s a lot of adjectives, Funko’s Hikari Premium Sofubi Vinyl Figures are 11-inch soft vinyl figures.  This one is limited to 5,000 pieces and only available from Entertainment Earth.

Funko is known for having several variants for each of their Sofubi figures, from color changes to translucent glittery versions.  Several variants of the Groot Hikari Vinyl Figure were displayed at New York Comic-Con, but this Entertainment Earth version seems to be the most movie-accurate.  You can order it now at EE.

And for Hikari collectors, Barnes and Noble just put up their exclusive black-and-white version of the Spider-Man figure, called “Dangerous Spider-Man” for $71.  That is not a pre-order; mine has shipped already.