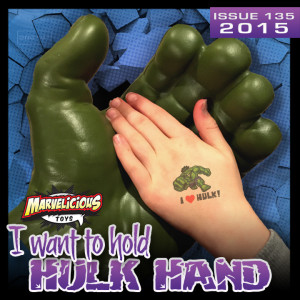 For Captain America the shield is more than defense–it’s a symbol of America and taking “the American Dream and make it an American reality.” Now, nearly 75 years after first appearing in Captain America Comics #2, Captain America and his shield serve as a symbol, both in the Marvel Universe and in the real world, of strength, idealism, and patriotism. And as seen in The Avengers and the two Captain America movies, it’s pretty darn cool as well!

In 2014 eFX Collectibles’ gave fans their chance to be like Stephen Colbert and put Captain America’s shield on their walls with their Avengers Captain America Shield Prop Replica. A full scale collectible cast from the original molds of the prop used in The Avengers, this eFX prop had been teased for years. Even with an edition size of 1,500 it sold out quickly. But the Marvelicious Toys hosts have one in-hand and review it on this episode!

So what are you waiting for? Marvelicious Collectors Assemble for this week’s new show! 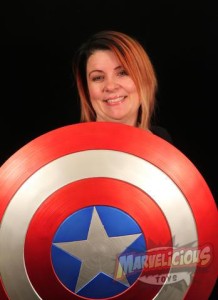