Introduction to the House of Chthon

On Now Playing, the movie review podcast, Jakob, Stuart, and I are reviewing the three theatrical Blade films.  However, several people have expressed interest in the supposed “fourth Blade movie”, Blade – The House of Chthon. 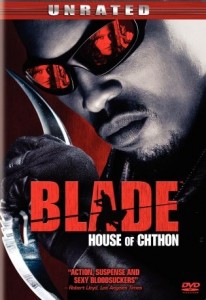 Despite all appearances, this was never intended to be a movie.

Truth be told, there is no fourth Blade film.

The confusion is completely understandable.  In 2007 Warner Bros. released the pilot to the Blade television series on home video, and as the series was already cancelled they named the DVD Blade – The House of Chthon.  Later, as part of a series of “value bundle” DVDs, a DVD was released claiming it contained “4 Film Favorites”:  Blade, Blade II, Blade: Trinity, and Blade – The House of Chthon.

But despite clever marketing, what is being billed as House of Chthon is not a movie, nor was it ever intended to be a standalone film.  The video was developed with the title “Pilot”, the customary title to the first episode of most television series.  Pilots are usually filmed prior to shows having been picked up by networks.  In the case of Blade, the pilot convinced Spike TV to order 11 more episodes.

In years past pilot episodes for one-hour adventure shows could be considered self-contained movies.  The pilot episodes for Knight Rider, The A-Team, and even Star Trek: The Next Generation served as both, giving audiences a self-contained story while introducing new characters and new situations which can continue into future episodes.  The presumed pilot for the Generation X TV series, a movie that aired once on the Fox network, also falls into this category.

In the past twenty years however, television has changed and stand-alone, episodic television has been replaced with serialized stories–for example, compare The Incredible Hulk, where every episode stood alone with David Banner in a new town, to Lost, which built upon its own mythology to the point new viewers had difficulty understanding what was going on.

But the pilot episode for Blade, and the entire Blade series, falls more into the latter category–a serialized action-drama with a single story arc that encompasses all 12 episodes.

As such, there is no way for Now Playing to review the first episode of this TV series without watching all twelve episodes.  But starting later today you will be able to read my reviews of all twelve Blade episodes, posted one per day, here at the Venganza Media Gazette.

Want to watch?  You can watch the entire Blade series free at thewb.com