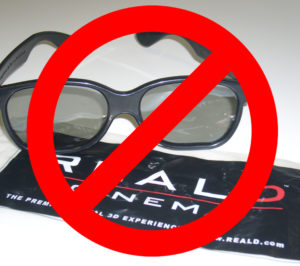 Did James Cameron wait too long for his Avatar sequels? It seems that by the time Avatar 2 is released (optimistically scheduled for 2020) the 3D format utilized by that 2009 original may be a thing of the past.

IMAX CEO Richard Gelfond announced this week that the company will be reducing the number of 3D screenings on their high-priced, large format projectors and screens. He cited a “clear preference” from North American audiences for 2D films.

This statement of direction does not signal an abrupt shift. IMAX’s most recent release, Christopher Nolan’s Dunkirk, was filmed and released only in 2D. (Nolan has a history of disliking the 3D format, refusing Warner Bros’ requrest for his Dark Knight films to be released in the format which commands a higher ticket price.)  Before that, the 3D post-converted Spider-Man: Homecoming was shown on IMAX screens in a combination of 2D and 3D presentation.  This is a change from even a year ago when most IMAX viewings required the audience to don a pair of special, plastic glasses.

It’s not only in theaters that 3D is dying. Movie viewers also have shown a preference for the 2D picture in their homes. In 2010, riding off Avatar’s success, High Definition Blu-Ray discs started shipping in 3D formats (the first of which was Cloudy with a Chance of Meatballs).  3D features were included on all high-end 1080p televisions and home projectors.

However, with the recent advances in 4k resolution, 3D has become a feature of the past. Over the past few years television manufacturers like Sony and LG have phased out 3D capabilities on most of their 4k televisions. With their 2016 models LG only offered 3D on their curved television sets; in 2017 3D was removed altogether.  Likewise 4k home projectors are removing support for 3D, with only Sony offering true 4k projectors that are backwards-compatible with the 3D Blu-Ray format.

Indeed, there is no established standard for 4k home video content to be displayed in 3D; currently movie buyers must choose between the higher resolution or the greater depth in their films.

Is this a win for consumers?

The 3D format has long been rife with viewer complaints.  In addition to being forced to wear glasses to watch 3D content, be it in theaters or at home, many viewers could not appreciate the added dimension. Per vision insurance company VSP, 5% of the population cannot percieve 3D, and another 25% have trouble perceiving 3D images.  Another 25% or more have complained of headaches, eye strain, and eye fatigue from current 3D digital projection.

These complaints have gotten many people to buy special “2D Glasses” which allow them to see (non IMAX) 3D films in 2D format. (Now Playing Podcast host Marjorie can vouch for these glasses’ effectiveness.)

Many theater-goers also complained about the unreliable quality of 3D in films, much due to the post-conversion process many studios use to save money. The vast majority of 3D films were post-converted–in 2017 only Transformers: The Last Knight was shot natively in the 3D format. On Now Playing Podcast we have complained about lackluster 3D in Spider-Man: Homecoming, War for the Planet of the Apes, Pirates of the Caribbean: Dead Men Tell No Tales, and other movies.

Will this hurt studios?

Yet despite these consumer complaints, studios have continued to push the 3D format, which commands higher ticket prices.  As movie budgets continue to expand, the higher priced 3D tickets, IMAX tickets, and other “premium” theater experiences have bolstered studio bottom lines.  More, the 3D Blu-Rays sell for $30 or more, while their 2D counterparts are often half that. (Of note, the higher-resolution 4k Blu-Ray discs are often priced equal to, or higher than, their 3D counterparts.)

While the 3D Post Conversion can add $10 million or more to a film’s cost, the increased revenue often offsets that. Many older films, including Jurassic Park and Top Gun were post-converted and re-released to theaters to grab their studios a quick buck.

Yet this switch back to 2D may not bring cheaper ticket prices. AMC Theaters charges the same for 2D and 3D IMAX screenings. It’s possible theaters may raise all ticket prices to current 3D prices to help offset these losses. Also, studios and theater chains have discussed having “event movie” pricing, where tickets cost more for big-budget blockbusters with or without “premium” gimmicks like 3D.

No change for animation?

The movie format that has generated the greatest 3D success is kids’ fare and computer-animated movies, such as LEGO Batman and Moana.  As these films are entirely computer-generated the 3D is more ingrained in their development. The effects are better, and the audience for those films are primarily younger and not yet burnt-out by the format. While Gelfond made no specific mention of animated films staying in 3D, it is likely these will remain in that format for years to come.

The modern 3D era was brought in by Cameron in two waves. In 2003 the first modern, digital 3D film was his IMAX documentary Ghosts of the Abyss.  The format had a slow growth over the next six years, mostly as a gimmick in kids films including Spy Kids and The Polar Express.

The change to 3D was a clumsy one. Superman Returns and Harry Potter and the Order of the Phoenix both had select scenes converted to IMAX 3D–requiring customers to don and remove 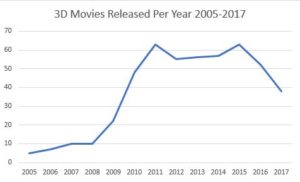 glasses through the films.

Modern 3D came into its own in 2009. By that time the 3D cameras required had come down in price. Horror films (which had heavily relied on 3D in the ’80s) got into the game with My Bloody Valentine 3D and The Final Destination.  Animated films premiered in the format, including Coraline, Monsters vs. Aliens, Ice Age: Dawn of the Dinosaurs and Cloudy with a Chance of Meatballs.

But Cameron ushered in a new age with the 3D film Avatar. Somewhat bolstered by 3D and IMAX ticket prices, Avatar became the top-grossing film of all-time. This created a 3D “gold rush” among studios, exponentially increasing the quantity of 3D films produced.

This growth continued until 2011, when 63 3D movies were released.  Growth then leveled off through 2015, when the number of films started to decline.

With these changes to home video and IMAX formats, it is likely 3D films may return to their pre-Avatar numbers.

What do we lose, besides depth?

I’m no great fan of 3D. However, as a movie-goer who prefers to see the movie as the director intended, I’m slightly upset by the loss of the 3D home format. Every movie I’ve purchased since 2010 has been in 3D, if available. I was especially happy with the Transformers films which not only were released in 3D but also changed to the IMAX aspect ratio for their home video releases.

I remember growing up watching movies like Friday the 13th Part III, Jaws 3-D, Emmanuelle 4, and Freddy’s Dead: The Final Nightmare on video. All three films had 3D components in theaters which translated poorly to television.  The moments of “I can tell that should be 3D” worsened each viewing experience.

I recently purchased my first 4k TV and had to go through great pains to find one that would continue to support my 3D Blu-Ray discs. It seems in the next five years any movie with great 3D, such as Avatar, Tron: Legacy, and X-Men: Apocalypse will only be seen in their flattened versions.

Even movies filmed in 2D, such as Star Wars: The Force Awakens and Guardians of the Galaxy Vol. 2 had effects sequences specifically designed in 3D to showcase the technology.

Home movie viewers will lose the ability to view many movies from the past decade as they were intended to be seen.

But overall, I believe 3D is a gimmick that more than ran its course. I applaud IMAX for choosing consumers over studios, and I hope that filmmakers now focus on plot and character depth, instead of manufactured depth on the screen.

What do you think? Sound off in the comments!