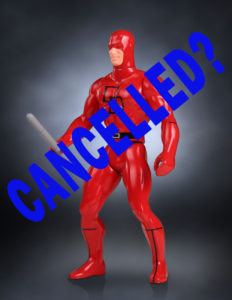 Has Gentle Giant’s Jumbo Daredevil figure been cancelled?  It sure seems that way.

Their 12-inch Daredevil figure was announced in October, 2015.  I immediately pre-ordered from Big Bad Toy Store, anxious to not miss out on any of these Secret Wars replicas – 12-inch reproductions made from scans of Mattel’s original ’80s figures.

However today I received notice from BBTS my order was cancelled.  The reason? This figure is not being made!  The full text read:

We have been informed by the manufacturer that they will not be producing the GG10720 12″ Daredevil (Secret Wars) . Unfortunately this means we must cancel our preorders for this item. We apologize for the inconvenience and greatly appreciate your understanding. If this item is re-solicited in the future, we will be sure to publish it on our website once again.

We are disappointed our vendor is unable to fulfill this item and apologize again for the inconvenience. Thank you for your continued business.

There have not been any new Jumbo Marvel figures announced for several months. While Gentle Giant has two DC Comics based Jumbo Figures as 2016 San Diego Comic-Con exclusives, Marvel collectors only have some mini Secret Wars bobbleheads to buy.

Is this the first sign of the end of Gentle Giant’s Marvel Jumbo Figure line?  We have reached out to Gentle Giant for comment, but as of this post we have not heard back.

If we don’t hear back before, we have an interview scheduled with Gentle Giant next week at SDCC, so we’ll be sure to get the details then!

Follow all the SDCC Marvel Collecting news at MarveliciousToys.com