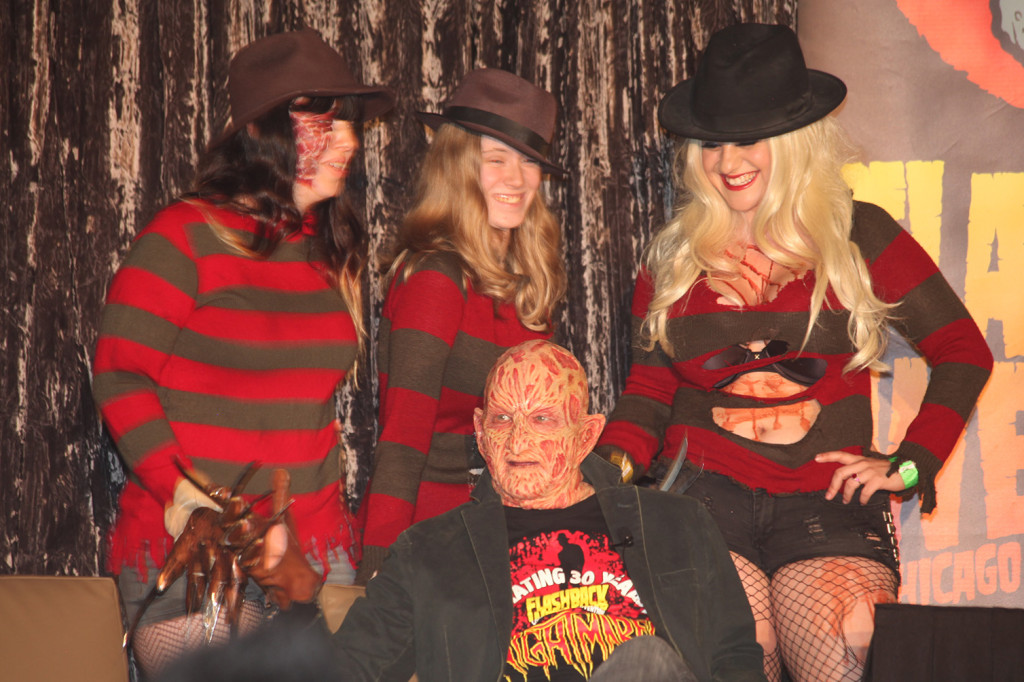 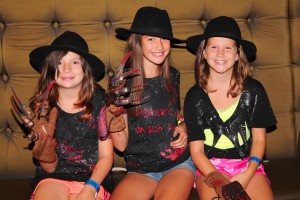 Making a rare midwestern appearance, star of the Nightmare on Elm Street movie series Robert Englund was Flashback Weekend’s headline guest.  Englund spent all day Saturday and Sunday meeting fans, signing their memorabilia, and sharing stories of his life from the making of A Nightmare on Elm Street to The Mangler and more.  Fans lined up for hours to meet this horror icon.

Though the staff at Flashback Weekend had a convenient ticketing system to minimize wait times, Englund’s autograph line still wound out of his private room.  Even those with $110 “priority line placement” tickets stood in line for nearly three hours.  Once the fans reached the front of the line, though, the experience was rewarding.  Englund is known to have a slow autograph line as he spends a few minutes talking with each fan.  I watched as he fawned over one fan’s Japanese theater program promoting the release of 1989’s A Nightmare on Elm Street 5: The Dream Child.  “You have some cool shit,” he said to another fan who brought a DVD collection covered in autographs from other stars.

The long line may have had its advantages.  One congoer recounted his experience in Englund’s autograph line seven years ago at Flashback Weekend:  he met his wife in that line.  Now he, his wife of five years, and their daughter returned to again visit their horror hero.

The cost of Englund’s autograph was $50.00 per item–a very reasonable price for con-goers.  (For comparison, at the upcoming  Wizard World Chicago convention The Incredible Hulk’s Lou Ferrigno is charging $40.00, Marvel Comics’ Stan Lee $80.00, and, at New York Comic-Con in 2013, Sylvester Stallone charged $395.00).  While some celebrities rarely look up from their tables, their hands furiously signing item after item, Englund ensured each fan felt they had their moment with him and a story to tell as they left. 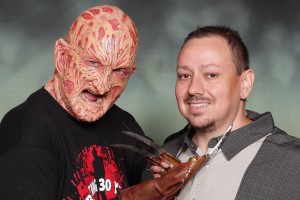 Arnie seized the opportunity to get a once-in-a-lifetime photo with Englund in the Freddy makeup.

While the chance for Robert Englund’s autograph was welcomed by the fans, the far more publicized event was Friday’s exclusive photo opportunity with the star–in full Freddy make-up.  While celebrity appearances and photo opportunities are regular occurrences at conventions, rarely do the stars dress up for the occasion.  On Friday, however, Englund underwent a two-and-a-half hour make-up application transforming him into the onscreen persona of Freddy.   The latex prothetics that turned Englund into his on-screen persona were created and applied by 30-year Hollywood makeup effects artist Robert Kurtzman, who worked with Englund on the fifth Nightmare film.

The cost was very high– the photo opportunity, consisting of a professionally lit shot done by Celeb Photo Ops, a single 8″ x 10″ photo printout, and weekend admission to the convention (for one person) cost $365.00.  Up to two people could be in the photo, but the guest would have to pay admission separately.  The night of the event the photo itself could be purchased separately for $295.00.  Additional prints and digital download options added to the cost of the photo.  By comparison, at Wizard World Chicago photos with a single celebrity, also done by Celeb Photo Ops, range from $40 to $125, with the average being $55.  A photo with all seven stars of Star Trek: The Next Generation is in the same price range, at $299.00 (not including convention admission).

The cost was not due to organizer or celebrity greed.  Flashback Weekend started in 2002, run by Mike and Mia Kerz.  The event is held annually in the Chicago area., and all proceeds from Flashback Weekend, including the Freddy photo op, go to the preservation and operation of the Midway Drive-In located in Dixon, IL.  The Flashback Weekend web site states the philanthropic efforts are to “[provide] a theatrical outlet at the Midway Drive-In for new independent horror films [and maintain] a venue at the Midway for the screening of 35mm horror films.”  Englund cited this cause as a motivator behind his decision to appear in full make-up.

Despite the high cost, hundreds of fans lined up for this once-in-a-lifetime photo opportunity.  Fans came from across the country, some traveling from Tuscon, Pittsburgh, and Texas, for this chance.  Englund was in full-on Freddy mode, speaking in the gravely voice and sometimes letting out his trademark scream–acts which must be second nature for the actor who’s portrayed the dream killer for thirty years.  Fans hoping for a moment with their idol, however, needed to go to the autograph area as the photo op was a workman-like assembly line.  Englund seemed to have four  key poses:  for photos with one person he would put his blade to their throat.  For photos with two people he would attack one–usually the female.  For families that snuck a third person, a child, into the photo Englund would grab the young one’s hair, and for those who were wearing their own Freddy glove Englund had a crossed-blades pose. 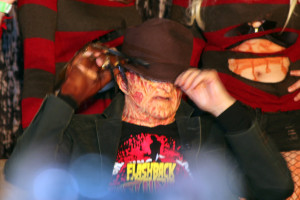 Englund demonstrated on-stage the problems with wearing his trademark fedora in photos.

The entire photo experience gave fans about thirty seconds with the star before the man behind the camera shouted “next” and fans were escorted out.  Englund seemed to barely have time to acknowledge any fans individually, it was enter frame, pose, picture, done.

In the weeks leading up to the convention several fans complained online about Englund wearing the makeup and glove, but eschewing Freddy’s trademark sweater and hat.  On stage that evening, in a private event for those who purchased the photo opportunity, Englund explained the hat created numerous lighting problems that plagued the filming of all the Nightmare films.  For the sake of a good photograph the hat had to be skipped.  As for the sweater?  Englund explained that fans could find convincing Freddy characters in front of Mann’s Chinese Theater and other locales, and that by wearing the official T-Shirt of Flashback Weekend fans could prove their photo was with the star himself.

Also in that evening panel Englund stated that this was perhaps not, as claimed on the Flashback Weekend web site, the final time the actor would don the make-up; the 68-year-old actor may not yet be ready to hang up his hat and glove.  Whether for other fan events or professional Hollywood productions fans may not have seen the last of Englund as Freddy after all. 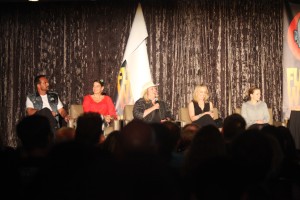 A Nightmare reunion at Flashback Weekend 2014! From left to right: Rusler, Rubin, Blakley, Wyass, and Keena

But like Englund each of the stars were approachable and friendly, engaging with their fans in the short time allotted.

In total, over two dozen celebrities attended the convention, including actress/musician Traci Lords, Gremlins star Zach Galligan, and character actor William Forsythe.  These actors filled the end of the convention’s exhibit floor, and while, at peak times, lines became difficult to navigate, the average wait was short.

Aside from Englund, the two most popular celebrities at Flashback Weekends seemed to be Lance Henriksen and Angus Scrimm.

Henriksen is a science fiction fan favorite with appearances in three of the Alien films, as well as Terminator and the TV series Millennium.  In total the actor has over 200 on-screen credits in a career that spans more than 50 years.  Yet Henriksen engaged fans eagerly, sharing stories of knife-practice on the set of Aliens or “alimony movies” he had to make like The Mangler 2.  He had a dry wit which left interviewer “Svengoolie” Rich Coz nonplussed during the Friday night panel.

Scrimm, an actor best known for the Phantasm horror series, had a autograph line second in length only to Englund’s.  The actor, who is celebrating his 88th birthday next week,  had a health issue that caused him to cancel an Indianpolis convention appearance in 2013.  Fans, not wanting to miss this opportunity, stood in a line that at times stretched the length of the convention hall.

Outside of celebrity appearances, Flashback Weekend had a bevy of costumers and revelers.  In addition to Svengoolie, local personalities Kitty Zombie, WGN Radio’s Nick Digilio, and Daily herald film critic Dann Gire helped host the event.  While the convention’s exhibit floor was one of the smaller ones for Chicago conventions, fans still could buy toys, T-Shirts, DVDs, and more.  For those whose tastes run outside the norm there were also taxidermied animal heads, lifelike silicon werebabies, and replica Freddy gloves.

Details for next years event are expected in the coming months at the official Flashback Weekend website.

See photos from the event in the galleries below.