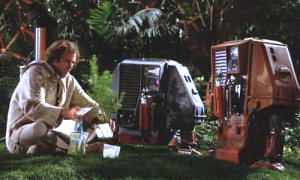 Don’t let the G rating, Joan Baez folk songs, or soft-focus opening shots of bunnies and flowers mislead you. Silent Running – the directorial debut of special effects wiz Douglas Trumbull (2001: A Space Odyssey) – is a somber, adult look at future environmental crisis set entirely aboard a greenhouse space station orbiting a deforested Earth. Bruce Dern goes from docile hippie to psychotic eco-warrior when soulless corporate bosses order him to nuke the last living plant and animal specimens and return to a barren planet sustained by their synthetic amenities. We should be on the oppressed gardener’s side, but his insurrection grows too bloody and paranoid for even the most militant animal activist or macrobiotic foodie to endorse.

Perhaps the only empathetic “characters” in Silent Running are a trio of service robots nicknamed Huey, Dewey, and Louie – reprogrammed to be green-thumbed companions after Dern offs his snide human co-workers. Trumbell’s ingenious miniature droid suits are customized to fit double-amputee actors, who bring a humanizing motion to the walking appliances that’s cute even when they’re digging graves. This is the rare environmental message movie that actually celebrates the machine as nature’s ultimate salvation – a techie’s vision of utopia. It remains progressive today, even if much of the rest of Silent Running suffers from outdated concepts and a meandering plot.

Tom Cruise might hold Bruce Dern’s same custodial occupation on the wasteland of Oblivion, but he’s not going to settle for socializing with a bunch of spherical drones – he wants a hot wife! And not that redheaded nag from his arranged marriage (Andrea Riseborough)… anyone who’s seen Total Recall knows she has ulterior motives for pressing him to spurn Earth for a Saturn moon. No, Cruise dreams of Olga Kurylenko – an enigmatic woman who beckons from repressed memories long before they’re reunited at his secret log cabin tucked inside the last green valley.

The starkest contrast between Silent Running and Oblivion is that Cruise is less preoccupied with rescuing the planet’s ravaged flora and fauna than piecing together his former identity. It’s a self-obsessed journey told largely in cryptic exchanges with coy characters like Morgan Freeman. The mystery unfolds in your head, but never your heart. And once this stooge has finally figured out he’s supposed to be acting like Tom Cruise in a big-budget Hollywood fantasy, many will have grown impatient for some explosions and requisite action.

At best, Silent Running and Oblivion are gentle genre exercises I can only MILDLY RECOMMEND to hardcore science fiction fans thirsting for simple, self-contained stories. Their appeal lies primarily in their visuals.  This is a Double Feature that’s easily wiped from the mind, clones of more iconic movies.