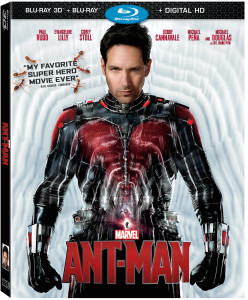 Marvel’s Ant-Man, the 12th film in the Marvel Cinematic Universe, will be released on Blu-ray and DVD Dec. 8, 2015, Disney announced on Friday.

The Paul Rudd starrer, which earned more than $400 million worldwide, will be available via digital download three weeks earlier, on Nov. 17. In its announcement, Disney revealed the releases would be stocked with bonus features that include audio commentary by Rudd and director Peyton Reed, the Making of an Ant-Sized Heist: A How-to-Guide and Let’s Go to the Macroverse featurettes, deleted scenes, and more.